Fresh off his highly anticipated KOD album release, multi-platinum selling rapper J. Cole was in Nigeria on Friday for the Castle Light Unlocks concert where he was the headline performer.

The heavily patronized event which took place at the Eko Hotels and Suites in Lagos had a rather bizarre aftermath leaving a sour taste in the mouths of some Nigerians.

A video of his performance posted on the Instagram page of popular rap platform WorldStarHipHop apparently caught the attention of a section of Americans who passed some rather insensitive comments about the West African nation. 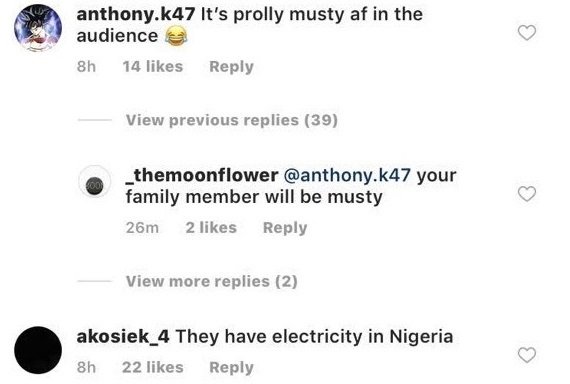 Some Nigerians did not take it lightly and clapped back.

Take a look at some of the reactions on social media and share with us your thoughts. Was it just mere trolling or sheer ignorance? On a broader perspective, do you think some Americans including African-Americans have skewed knowledge about Africa in general?

Black Americans joined in trolling Nigeria to points of asking if J Cole was dishing out free food to Nigerians.

We’re Africans doesn’t mean we’re not living better lives. Many of us live better than some of you saying shit.. Misinformed & Uncultured Racists..Y’all should Fokoff

Never Mess up with Africans especially Nigerians. When my Dad saw some hatred comments of Both white & Black Americans About J. Cole Concert in Nigeria, the Man formated his two phones, changed the phones language from “English (USA)” into English (U.K).
???? pic.twitter.com/F0eUMFhUI1

If whites acts towards Black Americans the same way they act towards we Africans, they immediately play the race card.

Just look at their annoying reactions to J. Cole’s performance in Nigeria.

Quite shameful to see black Americans making jokes about Nigeria after J.Cole went there.

These same clowns were all “Wakanda Forever”, African pride etc a few weeks ago. Pathetic.

J Cole posted clips of his concert in Nigeria on IG and African Americans in the comment section be talking shit about Nigeria. Lol.

What happened to the “we are all Africans” wave that existed when Black Panther came out?

They love the aesthetics of Africa… Not Africans.

Their comments on J. Cole Nigeria tour are embarassing