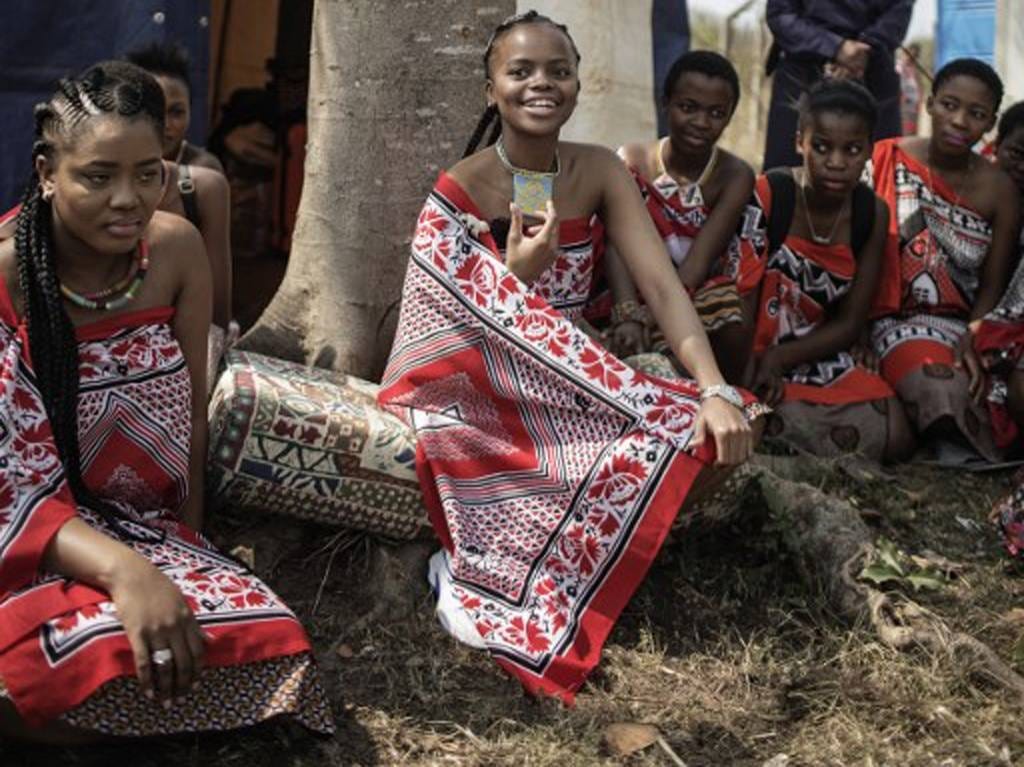 Even though Swaziland King Mswati III often makes headlines for exploiting his own people, his eldest daughter, Sikhanyiso Dlamini  (pictured center), principal princess of Swaziland, continues to be an ardent defender of her father’s monarchy. Recently heading a traditional event in her homeland, Sikhanyiso, a.k.a. Princess Pashu, praised her father and his monarchy with rap.

Earlier this month, just before leading tens of thousands of girls in the traditional Reed dance, where virgins dance before the king topless, she spoke with the press about how the African monarchy is different from Europeans.

“Royalty in Africa is rather different in terms of, we don’t have the liberty [like] European royals have. We don’t have the time so much for leisure. It is the culture that drives us to do what we do,” she said.

She also took the time to rap, giving praise to her father’s kingdom, a practice that she has been doing publicly since at least 2013, when she released “Hail Your Majesty,” rapping:

“My heart is stirred by a noble theme, humble servant

“My heart is stirred by a noble theme. A humble servant, I recite my verse for the king,

“The time has come and the time is now, for King Mswati’s dream to manifest within.

The hook to that song, which Princess Pashu passionately sings, says:

“There is no one like you, Oh king of nations, you are.

The king of nations, you are.

“Your a Father, your a leader and a hero. Exalted as a prince among the people.

As the last absolute monarchy in Africa, Princess Pashu’s father (pictured), who has more

than 12 wives and more than 20 children, continues to be a controversial figure.

Just this February, he reportedly demanded that the rich in his country start paying taxes.

Last Thursday, King Mswati said before Parliament the “time has also come for the authority to fast track the programme of lifestyle audits.”

The request ruffles feathers because the King, who is the last monarch in Sub-Saharan Africa, pays no taxes himself, even though he is worth $200 million USD.

But it is not just how much he is worth that is at issue; King Mswati reportedly continues to increase his income even though the majority of the Swaziland population has been “diagnosed as malnourished” and living in abject poverty.

And in May 2014, King Mswati also made headlines for increasing his budget more than 10 percent…even though his country is listed as one of the poorest nations in the continent.

For the new budget of the king, whose personal fortune is estimated at around $200 million (R2 billion), he makes provisions for his salary, his mother’s upkeep, and royal aides.

This also includes provisions for construction work on his palaces that will cost the taxpayer about $12,6 million (R129 million). The royal budget is not debated in parliament, though, as discussions about the budget would be seen as challenging Africa’s last absolute monarch.

The small kingdom is one of the poorest nations in southern Africa, where more than 60 percent of the population of 1,2 million live on less than $1 (R10,31) a day.

Still, Princess Pashu maintains that her father is erroneously criticized, insisting, “It’s a problem when you put greedy people in power. And it’s a problem in a society like Swaziland where the ultimate authority then gets blamed for everything that happens beneath the surface.”