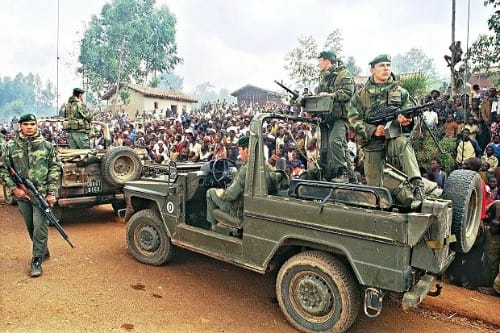 The Rwandan Genocide of 1994, occurring within the time of the four-year Rwandan Civil War, was short-lived but its impact has lasted for the past 20 years. On this day in 1995, the Human Rights Watch (HRW) group charged France with arming and training Hutu extremists who targeted and killed thousands of the Tutsi ethnic group.

SEE ALSO: Maya Angelou’s Great Accomplishments In Spite of Life’s Hardships Should Encourage All To Be Better

As history notes, the genocide began on April 6, 1994, when a plane carrying then-Rwandan President Juvénal Habyarimana and Burundian President Cyprien Ntaryamira was shot down as it landed in Rwanda’s capital city, Kigali. Habyarimana was part of the majority-rule Hutu group, and his death sparked Hutu extremists to murder Tutsi and Hutus who were critical of his time in office.

Speculation surrounding Habyarimana’s death began to swirl immediately. At first, it was suspected that the Tutsi opposition leader – and current Rwandan president – Paul Kagame ordered the attack while leading the rebel Rwandan Patriotic Front (RPF) forces, but Kagame claimed that France was responsible for the assassination. Kagame was cleared of wrongdoing in a French investigation in 2012, although former members of Kagame’s staff insist he was the main culprit.

Habyarimana aligned himself with France and Belgium, the latter of which was the country’s former colonial state. Kagame’s RPF forces ended the genocide in1994, stamping out ties with the French that the Hutu’s ruling members sought to maintain. Under President Pasteur Bizimungu‘s rule, Rwanda found allies in East African nations and in the West.

Many Hutus fled in to exile, scattering in to refugee camps across Zaire and South Africa.

The HRW discovered that France had begun arming Hutu militants living abroad and training them on military tactics in order to bring more fight to the Tutsi and RPF. China and the Seychelles were also implicated in the report, and the HRW called for an international arms embargo against Rwanda among other demands.

From the University of Pennsylvania’s African Studies Center:

Behind Zaire stands France, which has maintained troops in Rwanda and has trained Rwandan army and militia forces since at least 1990. After the start of the genocide, French soldiers evacuated French citizens, but failed to take action against their Rwandan allies who had launched the genocidal campaign. Instead, France diverted its arms supplies to the Rwandan military from Kigali to Goma airport in Zaire and set up a “safe zone” to which the architects of the genocide fled and where they received new weapons shipments. After the Rwandan government’s defeat in July, the French military escorted key perpetrators of the genocide out of the country and continued to provide military training for the ex-FAR in the Central African Republic.

Since then, the rift between France and Rwanda continues to widen.

A New York Times article published last month underscores the division between the nations. Prior to that, former French President Nicolas Sarkozy seemed to allude to the fact that France had some hand in the explosive nature of the Rwandan wars back in 2010.

SEE ALSO: Aboriginal Australians Recognized In Census On This Day In 1967