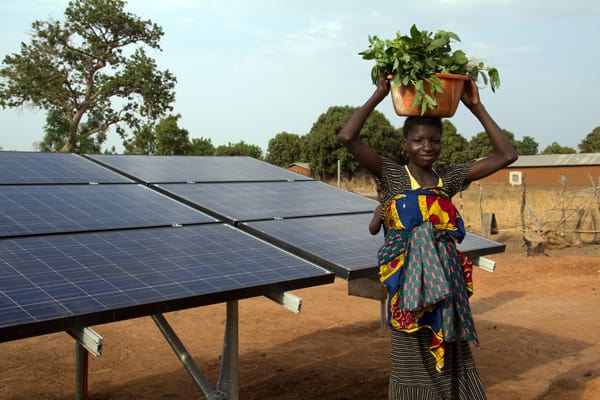 “I’d put my money on the Sun and Solar Energy, what a source of Power! I hope we don’t have to wait until oil and coal run out, before we tackle that.”  — Thomas Edison, inventor

For a long time now, Africa has been termed the “dark continent,” which is rather ironic considering the fact that Africa has got the potential to become a powerhouse when it comes to solar energy in addition to the fact that the continent has energy to power the rest of the world.

SEE ALSO: Name & Shame: How We Crucify Victims of Oppression Without Crucifying System

But despite this fact, it is tragic to note that Africans are still in desperate need of affordable and reliable power. People are deserting the rural areas and moving to the towns in the hopes of leading a better life. Most of these people either end up unemployed or leading more impoverished lives as they try to keep up with the hustle and bustle that comes with big cities. Therefore, great emphasis is being placed on developing the cities, but the outskirts are being neglected.

Revolutions in the past have occurred through fire, coal, oil, petroleum, electricity, and atomic energy, among others. Man has used most of these as weapons of war. Which begs the question: “If sunbeams were weapons of war, wouldn’t the world have had solar energy centuries ago?” (Sir George Porter)

It is undeniable that solar energy has been given some consideration in the recent decades, but we have been unsuccessful in harnessing the sun’s energy. Solar energy is vital to support life on earth: it helps grow food, light our days, influence weather patterns, provide heat, and can be used to generate solar electricity that relies upon man-made devices, such as solar panels or solar cells.

Not only does it provide a source of clean and low-cost renewable energy, if taken up well, solar energy can also assist in establishing an organic link between the rural and the urban areas.

The late-Sudanese Vice President Dr. Garang De Mabior once stated, “We should take towns to people not people to towns.” What he meant is that we should achieve a balanced development not only in centers and urban areas, but also in the villages and rural areas. Creating centers in the rural areas would help avoid rural-urban migration, inevitably mitigating the issue of overcrowded cites.

Not only can solar water pumps be used in the grasslands, for example, but it can also be used in some arid regions with the use of photovoltaic pumping irrigation, which would be effective.

The use of clean green energy is best seen in Morocco, where it has been a great success. Developing the agro-industry, for example, through solar energy would mean that small families can uplift their way of life, which in turn would assist with the development of the nations, having a positive impact on both social and political stability.

One issue many point to at the mention of solar power is the cost. However, many leading social enterprises, such as Nokero, are reasonably accessible. Therefore, a huge problem is that people are not educated enough about solar power. Furthermore, “the private sector is encouraged to embrace solar power, the more it will become ubiquitous.” This would enhance competition, therefore making the markets more accessible.

As Hillary Clinton said on Oct. 25, 2005, in a speech at Cleantech Venture Forum VIII, “We need more incentives to quickly increase the use of wind and solar power; they will cut costs, increase our energy independence and our national security, and reduce the consequences of global warming.”

We, Africans, must understand the great independence we can gain relying on renewable sources of energy.

There remains an urgent need to pioneer initiatives to harness the sun’s energy, among other renewable sources of energy, and create sustainable living, for example, through powered irrigation systems. This, in turn, will not only allow for economic and social prosperity, but also ensure we are seeking development that is eco-friendly.