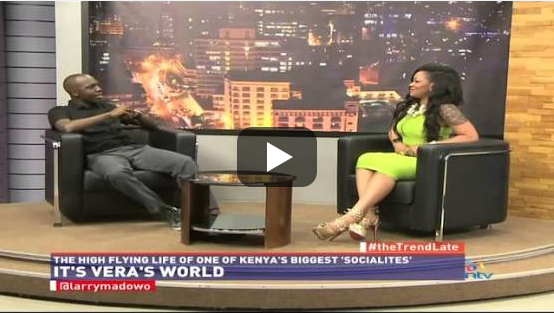 Listening intently, 24-year-old Vera Sidika (pictured right) strokes her $2,100 Brazilian weave as she answers the TV host’s questions about her spending $170,000 on skin lighteners. For Ms. Sidika, it is important for her to clarify the difference between skin bleaching vs. skin lightening: skin bleaching is when you use over-the-counter products whereas skin lightening is “done the right way,” she says.

Following the release of the interview, the #BleachedBeauty hashtag was trending with Kenyans expressing their concern over Sidika’s new complexion. Insults aimed at Sidika flooded in, in their thousands. Others created memes, and it soon turned into an undeclared competition of who will out-do the previous meme and who will, in 140 characters or less, make the best joke and gather the most re-tweets or garner the most favorites at Sidika’s expense. 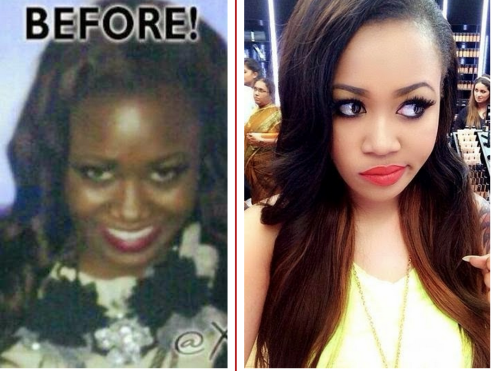 Tweeters then named and shamed all the individuals who bleach, with before and after photos (Sidika’s is pictured above) taking over the Twittersphere. Twitter philosophers concluded that these aforementioned women and men are to blame for young Black girls and boys feeling uncomfortable in their own skin and should be ashamed of themselves.

But the real problem is every Black man who has submitted to the White man and did not rebel.

Those Black men were the reason slavery advanced, and the reason slavery existed. The likes of Dedan Kimathi, Kwame Nkurumah, Jomo Kenyatta, Patrice Lumumba, and even Malcom X did not fight the Eurocentric worldview or white supremacy that considered the Black man’s skin, hair, and culture inferior.

Therefore, we should name and shame all the insecure individuals bleaching their skin.

Let us derive humor from their insecurities and stab them with the sharpest daggers in our vocabulary. Matter of fact, our friends on Twitter present a solution to most of the problems contemporary society faces: You know that woman who submits to her husband and stays in the kitchen? Let us all blame her for why patriarchy still exists today. The kid coming home from school to drive a blade in to his skin, let us all blame him for why bullying still exists. The young girl sleeping with high-profile individuals to fend for her family living in the slums, she is the reason many girls are doing the same.

Dear Black men and women, I urge you to join the fight against skin bleaching by questioning why “light skin” is promoted in the lyrics of mainstream media, questioning why billboards are promoting the Eurocentric idea of the ultimate beauty, questioning why White privilege still exists.

Question why your local media stations would spend airtime showing you the “ultimate” idea of beauty on the runways, but those are rarely men or women who look like your sister or brother.

Consider the parts of the interview where Sidika says she gets better treatment as a lighter woman IN AFRICA.

Let’s focus on the root causes of bleaching because that would be a much more deeper level of thinking.