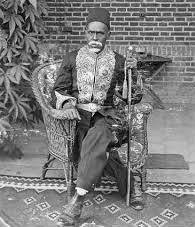 He was a slave trader in the late 19th century and later became a Sudanese governor. He was at odds with the British Governor General Charles Gordon and was referred to as “the richest and worst”, a “Slaver King” “who [had] chained lions as part of his escort” by England.

General Gordon who was sent to Sudan to suppress the slave trade was opposed by Al-Zubayr.