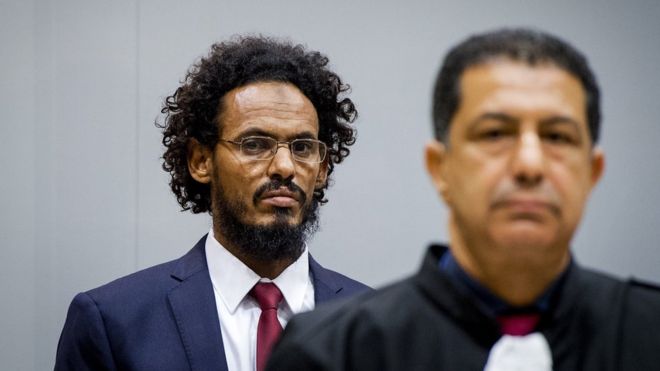 RELATED: MALIANS SAVE HUNDREDS OF THOUSANDS OF ANCIENT TIMBUKTU MANUSCRIPTS IN FACE OF TERRORISTS

Al-Mahdi is accused of being a member of Ansar Dine, an Islamic terrorist group in Mali.

As an alleged member, al-Mahdi was the head of Hesbah, a.k.a. the “manners brigade,” which worked to impose strict Islamic law on Timbuktu residents.

During his alleged position, al-Mahdi and the Hesbah destroyed nine mausoleums and a mosque, while also burning tens of thousands of ancient manuscripts.

The country of Niger handed al-Mahdi over to the ICC after they issued a warrant for his arrest.

Wearing a navy-blue suit and wire-rimmed spectacles, Mr Faqi told the court: “My name is Ahmad al-Faqi al-Mahdi, I am from the al-Ansar Tuareg tribe.”

He told the court he was born “about 40 years ago” in Agoune, 100km (60 miles) west of Timbuktu, and was a “graduate of the teachers’ institute in Timbuktu and… a civil servant in education in the Malian government beginning 2011.”

Timbuktu was declared a UNESO World Heritage Site in 1988 due to its ancient city.

Known historically as the nexus of Islamic teaching, the height of Timbuktu was seen from the 13th to the 17th centuries.

Today, more than 700,000 manuscripts remain as well as its iconic mosques, mausoleums, and cemeteries.

The Ansar Dine attempted to destroy the ancient city because they find the mausoleums, which are shrines to Timbuktu’s founding fathers, to be blasphemous.

However, with al-Mahdi’s case, the ICC hope to send a strong message to those who seek to destroy history.

At the end of al-Mahdi’s appearance, the presiding judge declared that the subsequent court hearing will occur on January 18th, when it will be determined whether al-Mahdi will be put on trial.