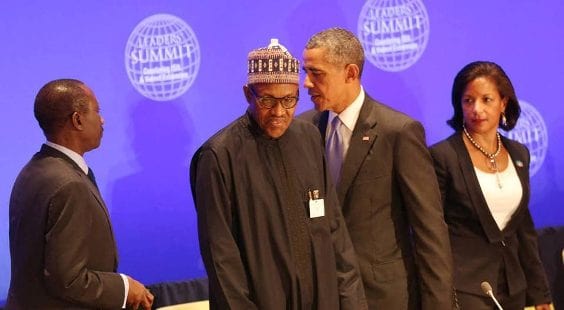 Ban Ki Moon at the Leaders’ Summit during the 70th Session of the UN General Assembly in New York today September 29th.

On Tuesday, Nigerian President Muhammadu Buhari (pictured center) named himself as Minister of Petroleum in order to further extend his anti-corruption campaign in his nation, according to Premium Times NG.

After speaking at the Global Leaders’ Summit on “Countering ISIL and Violent Extremism” in New York on Tuesday, President Buhari confirmed rumors about who would be the nation’s next petroleum minister when he named himself for the position simply stating, “I will remain Minister of Petroleum.”

He then added, “I will appoint a minister of State for Petroleum.”

For President Buhari, the strategic move is instrumental to routing out the endemic corruption found throughout government — and particularly in the oil industry — of Nigeria.

The oil industry currently accounts for 90 percent of Nigeria’s foreign currency earnings and has been historically overrun with corrupt leadership who have stolen obscene amounts of money from it.

Consequently, President Buhari made the decision to head the ministry himself, making it clear that subsequent appointments will be based on individuals who are able to pass an extensive screening.

Senate President Bukola Saraki echoed that goal, saying, “As we await the list of ministerial nominees this week, we are prepared to treat the screening with dispatch but with thoroughness.

“I believe the presence of ministers will create the space for greater policy engagement with the executive arm of government.

“I want to urge you all my colleagues to ensure that what is uppermost in our minds as we begin the constitutional task of screening of ministerial nominees is the overall interest of our country.”

Saraki then added, “Once the list is submitted, let us ensure that we treat it with dispatch and thoroughness. We must not be held down by unnecessary politicking.

“The enormity of our national challenges at this time does not give room for pettiness or politics of vendetta.”

Back in New York, President Buhari also announced that those who have stolen oil revenue in the past would soon be prosecuted.

President Buhari isn’t a stranger to the oil sector. In fact, in 1976, he was appointed the petroleum minister and eventually chair of the state-owned NNPC oil company.

Then in the 1990s, Buhari served as chair of the Petroleum Trust Fund under General Sani Abacha.