Every year Top Model of Colour continues and strives to raise the bar and this year for season 7 the UK version of TMC has been rebranded as an international competition and over the coming years the winner of TMC International will hold the title of TMC the World.

In addition, for the first time ever there will be an award for the top commercial model that enters the competition and this would be awarded to the best model that is 5.8 and below. It is also very possible that the model that wins this title may also be the overall winner of TMC International Season 7. 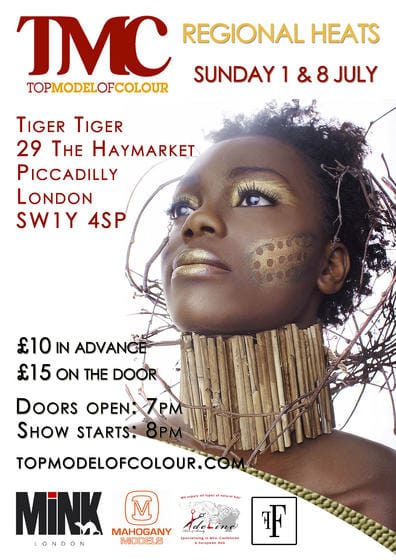 Top Model of Colour continues to create opportunities and open doors for models of colour who are struggling to break into mainstream fashion. Over the years TMC has had thousands and thousands of entrants who have gone on to achieve recognition at varying levels within fashion.

The current winner of TMC season 6 Janita Francis, has already done fantastic things since winning in December 2011 which has included walking in London Fashion Week, being on the covers of Zen magazine, Oh yes magazine, and has done shoots for Black Hair and Beauty and numerous other magazines including being the first ever beauty model to be featured in OK! Nigeria Magazine. Janita is the current Face of Afro Hair Live and is not only a supermodel but is also giving something back to society by being an ambassador for the internationally renowned charity Kidz Company.

The regional heats will be taking place on the 1st & 8th July, the heats will be intimate and the models will parade in front of the judges with the audience close up and standing amongst them. The aim is to see how the contestants manage in a pressurised environment and will ensure it is fairer for the commercial models by not making the catwalk the central focus during the heats.

TMC has a spectacular finale lined up with some fantastic surprises for the finalist and intends to test their resolve to make it in the fashion industry and see who would be the last woman standing. Some surprise contestants will also be brought in at various stages of the competition.

With thousands of models applying to enter the competition each year TMC continues to prove to be the premier competition for models of colour in the world.