The prestigious University of Oxford in England has honored its first black student, Christian Cole, from Waterloo, Sierra Leone with a plaque etched on a wall in Logic Lane at the University College.

Speaking at the plaque unveiling ceremony on Saturday, the Master of the University College Sir Ivor Crewe said the inscription will be used as a symbol of the institution’s continued dedication to “recognizing and supporting” bright students regardless of their backgrounds.

According to the BBC, Cole – a grandson of an African slave – joined the University of Oxford as a non-collegiate student in 1873, a time when it was considered “remarkable and unusual” for the University to admit black students.

At the time, Oxford was touted as an institution of the elite, only accepting white students of the Victoria England. An archivist at the University College Oxford by the name, Dr. Robin Darwall-Smith, told the BBC that the city was a daunting place for Cole.

“For a lot of people, he would have been the first black African they ever encountered,” according to Darwall-Smith. 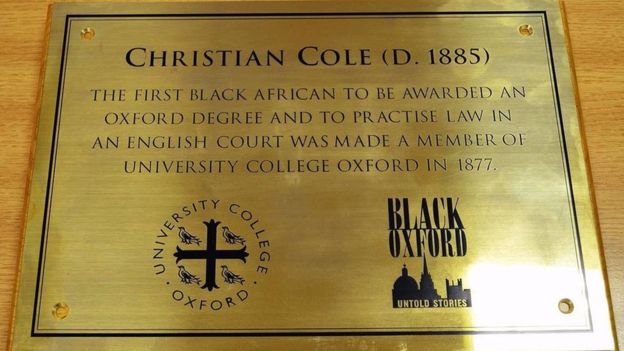 Records show that Cole moved to England as an adopted son of a Church of England minister, who was at the time based in Sierra Leone. While studying, Cole survived on allowances given to him by his uncle and the little money he earned from tutoring and offering music lessons.

When his uncle died, students, who had grown fond of him, initiated a financial appeal to help him meet his financial needs.

Despite the culture shock, Cole continuously strived to make himself better and make an impression on Oxford life. He always spoke at the institution’s debating societies, the Oxford Union, and any other occasion where he was called to speak.

The institution’s records indicate that his presence at the Oxford’s honorary degree-giving ceremony didn’t go unnoticed. It is reported that Cole was greeted with a hero’s welcome by the crowd at the event.

“There would have been these visitors saying, ‘Gosh, who is that?’” said Dr. Darwall-Smith.

“That is Christian Cole, he’s from Sierra Leone.”

Cole graduated in 1877 with a fourth-class honors degree in classics.

While some people saw such honors as a failure, it must be noted that very few non-collegiate students attained honors degrees at the time.

After graduating, Cole went back to Sierra Leone for a few years and later returned to England to join the Inner Temple in London. In 1883, he became the first black African to practice law in an English court.

As a young black African barrister, Cole struggled to find enough work to survive in England, a situation that forced him to relocate to East Africa in 1885, where he died of smallpox at the age of 33.