Inside a dense African jungle, two groups of strong-bodied black men face off in a fierce gun battle. Heads are blown off, bodies maimed and monster trees brought down by missiles launched by military helicopters. Welcome to Wakaliwood, home to Uganda’s best action-packed movies. Situated in the Ugandan slum of Wakaliga, the film studio has attained worldwide popularity with cult following on social media and crowded screenings in overseas cities such as Hong Kong, Stockholm and New York City.

At a cost of only $180 per film, Wakaliwood releases a movie every month, thanks to the inventive instincts of Mr. Isaac Nabwana. A former street vendor-turned filmmaker, Mr. Nabwana, who is now viewed as Africa’s Tarantino, produces and directs each Wakaliwood film.

In a recent post published by the Wall Street Journal, Mr. Nabwana said his main aim is to entertain the world:

Uganda has lots of problems, but look at what we’re creating here. Soon I hope Mr. Tarantino will be compared to me!” Nabwana said.

Nabwana’s thrifty, unique theatrics have attracted big names in the film industry from as far away as New York. A good case in point is Mr. Alan Hofmanis, program director for the Placid Film Festival, who now features in various action scenes and participates in other aspects of Wakaliwood film productions. 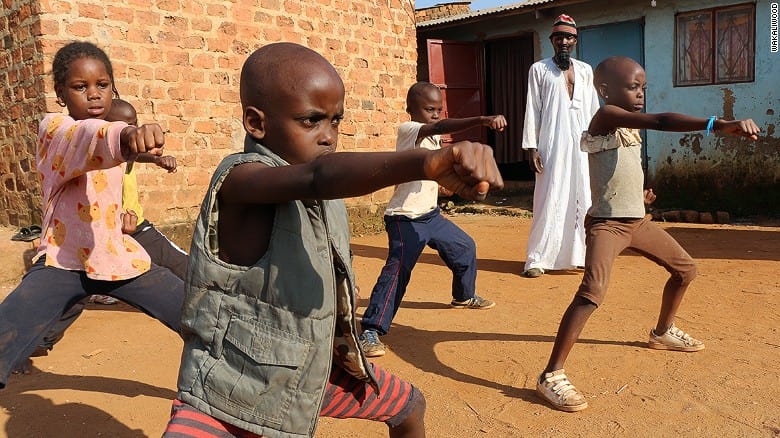 In a recent BBC post, Hofmanis narrates how he found himself in the dilapidated Kampala slum. After watching a minute-long clip of bloody gun fights, sped-up kung fu actions, and computer-generated helicopters bombarding Kampala, this American fan fell in love with the amazing creativity and ingenuity showcased by these young film enthusiasts. “Around 40 seconds into it, I decided: I’m coming to Uganda,” Hofmanis says.

A closer look at Wakaliwood films reveals the true picture of a financially constrained group of people with a billion dollar dream. Nabwana uses recycled computers to edit films in his house. The film studio largely relies on community support through volunteer actors and fundraisers.

He says that a recent Kickstarter campaign that was intended to raise at least $200 brought in $15,000, which he used to purchase cars, trucks and other props to blow up on the screen.