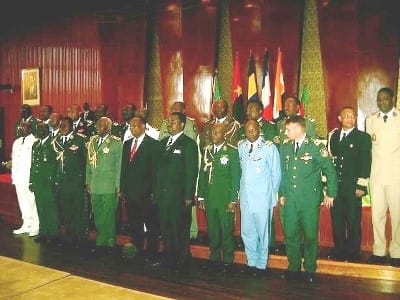 Yaounde, Cameroon (Face2face Africa)  Since 2005, Cameroon’s International War College, found in the locality of Simbock, has been training senior military officers not only in the Central African Sub Region (CEMAC) but also from other non-CEMAC countries.

The 45 military officers from African and non-African countries received their end of course diplomas (Master 2 Certificates), after they undertook a one-year training programme at the college.

While he chaired the event, Cameroon’s Defense Minister Edgar Alain Mebengo’o saluted the quality of training in the college that covered areas like the strategy and the art of war. He called on graduates to immediately put to use the skills acquired to fight terrorism and other security threats in their respective countries.

According to Nigerian trainee Navy Commander Shaman Richard, he appreciated the quality of training received, “What we have been taught here has helped us to broaden our skills in terms of analytical thinking at various stages of operational planning and on how to interface between the different strategic levels in multinational task force.”

“We have been trained on how to plan operations within national and multinational levels with skills that will make us to be able to work within an inter-ministerial level beside purely military issues, including integrating development and governance aspects,” intimated a jubilant Lieutenant Colonel Aboyakwi Guyos of Cameroon.

The Commander of the college, Major General Essaiyi Gambo, was proud that the training did not only take place in Cameroon, but also in countries like France, China, Gabon, and the Democratic Republic of Congo.

Mr. Mebengo’o also noted that two military officers from the United States and two more from France also made up the graduating class, which to him further validated the college’s and Cameroon’s excellence in military training.

Prizes were awarded to some deserving graduates, with Cameroon’s Lieutenant Colonel Engolo Ngomba earning the prize of excellence.