Five years after the 1969 Somali coup, Mogadishu hosted the head of states of the African Union, AU (then the Organisation of African Unity, OAU).

President Siad Barre, going by the name Jaalle Siyaad, meaning Comrade Siad, as the chairman of the organisation at the time, presided over the events.

According to Thabo Mbeki, the event in Mogadishu was a celebration of the impending end of Portuguese rule in Africa.

“The reason for the celebration was the then impending collapse of Portuguese colonialism and the liberation of the African Portuguese colonies. Unquestionably, the star of the day, who attended the Assembly, was the late Samora Machel, who was to become the first President of liberated Mozambique,” he wrote in a letter in 2007. 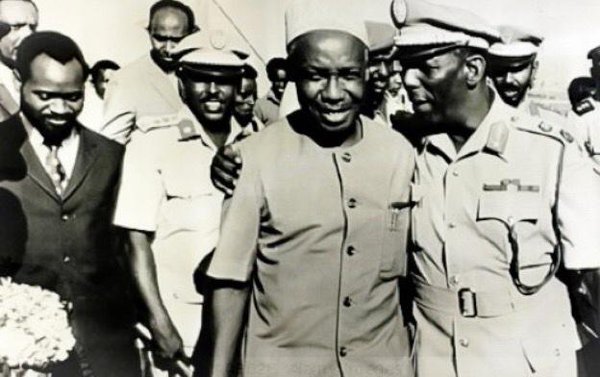 Comrade Barre with his hands around Tanzania’s Julius Nyerere. Also in the Picture is Mozambique’s Samora Machel. Photo: XildhibanPublications

Besides the celebration, the summit discussed the contentious issue of the Ogaden region, which both Somalia and Ethiopia claimed.

Part of the entertainment the delegates enjoyed at the Summit was a play by a Somali drama group that sought to denounce neo-colonialism.

“The play had scenes of delegates visiting Western embassies on their way to OAU meetings.
Here they would be given briefcases full of cash. They would then be given instructions on the resolutions they should propose at these OAU meetings and how they should vote. The sketches included instructions on the need for these delegates to do everything possible to frustrate the struggles against colonialism and apartheid,” Mbeki further explains in his letter.

Here’s the video of the summit in Mogadishu.