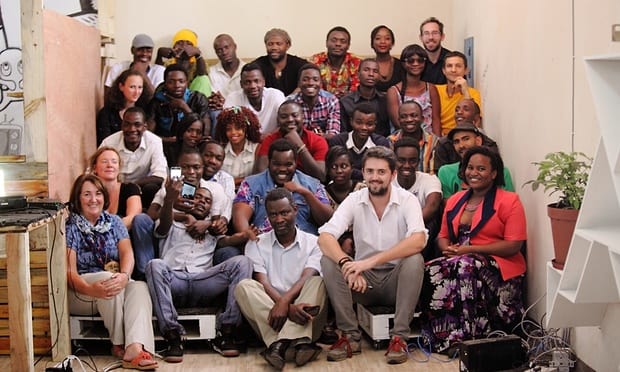 Pádraic MacOireachtaigh with colleagues from the Lake of Stars festival in Malawi.

In South African Padraic MacOireachtaigh‘s (pictured) offering, entitled, “My Skin Color Represents Privilege and Status…,” he writes about ultimately feeling like an outsider in Africa even though he was born and raised there.

Of his family’s decision to move to Africa, Padraic writes:

I was born a White boy in Apartheid South Africa. Mandela was still in prison. The writing was on the wall for the Apartheid regime, but there was still a long way to go. My parents – one Irish, the other somewhat Irish but English by birth (I tend to downplay this fact) – moved to South Africa at this dramatic crossroads in its history. They had a spirit of adventure (they still do), and the fall of Apartheid South Africa was something they wanted to witness first-hand.

And while Padraic would live abroad for some time; ultimately, he decided to return home:

After stints in various European countries, I moved back to the continent of my birth four years ago. I live between Burundi and Malawi, where I’m involved in organising the Lake of Stars festival and this year started up the Lilongwe Shorts film festival. These experiences, which bring me into contact with many different people, are often affected by the colour of my skin.”

But just as with most experiences, Padriac has found that his experience as a White man (or mzungu) has been a mixed bag:

There are the moments that warm the heart: when I tell people I was born in Johannesburg, almost without exception the immediate, confident response is: “Ah. So then you are African.” They don’t seem to mind that I came into the world a privileged minority in an Apartheid state. I am White, but I am not excluded from ubuntu.

But the hospitality Africans instinctively offer to strangers is one thing. In day-to-day life, I struggle to make Black friends. Those who know about South Africa’s grim past immediately assume that as a White South African, I’m a racist. Those who don’t afford me privileges I have neither earned nor necessarily deserve.

In Malawi, people insist on calling me “bwana,” the Swahili word for “master.” It’s often tongue-in-cheek, but sometimes there’s more going on. It is tied to a broader concept of patriarchy (which is not limited to race), but also to the colonial past. To be White and a man is to be superior.

But Padraic insists that it isn’t easy aligning himself with his own race either:

Living in a cocoon with people of my own colour is not ideal either. You notice racist views you are expected to share. White friends of mine lock their bedroom doors when they hear there’s a Black man coming to visit.

Here, Padriac goes even deeper in to the issue with a nonsimplistic analysis of the complicated dynamics of being White in Africa:

Some days, I try to forget that I am a White man on a Black continent. But you can’t. Each day you are reminded by barefoot children, by beggars on street corners, by taxi drivers, by the places you shop, the company you keep. At least in the African contexts I am most familiar with, Malawi and the Great Lakes region, you cannot in any real sense escape the social status your skin colour traps you within.

The colour of our skin represents privilege, status, wealth and a dark colonial legacy. But today it goes beyond that. It signifies access to markets and the freedom to move, to act, to speak openly. Being White in Africa is not the same, say, as being Black in Europe. But the feeling of dislocation remains, the sense of somehow always being, on some small but important level, an outsider. White Africans are not a tribe, but we are, perhaps, a diverse and peculiar phenomenon.