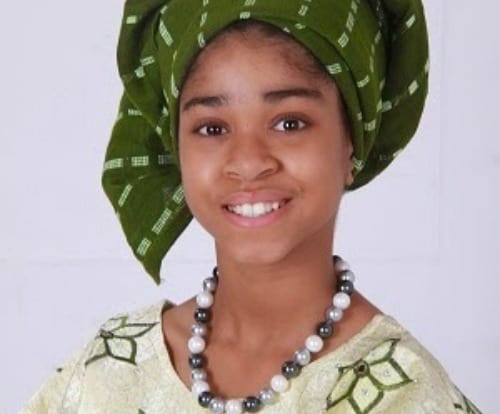 Even though Zuriel Oduwole (pictured) was born in California, her life’s work is squarely focused on Africa. To date, she has produced four documentaries that aim to show the best and brightest of what the continent has to offer, reports CNN.

SEE ALSO: Nigeria To Still Be Africa’s Largest Economy in 15 Years, Projected To Be in the Trillions

Twelve-year-old Oduwale, whose father is from Nigeria and mother is from Mauritania, was ushered in to the world of film, after she entered a documentary-making contest at school, focusing on Ghana’s revolution.

Since then, she has interviewed more than a dozen African presidents, shining a bright light on the dignity and beauty of African people.

“I’ve interviewed 14 heads of state and a few of those include the President of Tanzania, Liberia, Kenya, South Sudan, Nigeria, and Cape Verde, to name a few,” says Oduwole. “I’ve also been able to interview business leaders like my friend Mr. Aliko Dangote.”

As for her documentaries, like her first work, she chooses to focus on the serious topics of education and technology, with offerings such as “Educating and Healing Africa Out of Poverty” and “Technology in Educational Development.”

Her latest film, “A Promising Africa,” is the first of a series that will explore five African nations, beginning with Nigeria.

Watch the trailer for “A Promising Africa” here:

Of her work, Oduwole says, “I’m hoping that when people see these documentaries they will see Africa is full of positive things — not just the things that are on the news like war, famine, disease,” she says.

“I want to show them there is a lot more to Africa than what we see on the news — there’s dancing, music, great culture and more.”

With all of her documentaries, the World’s Youngest Filmmaker is involved in each part of the filmmaking process.

“As I edit, produce, set up, and write the scripts for my documentaries, I have to learn a lot of things.”

And as if her film work wasn’t enough, Oduwole, who is studying two grades above the normal level, has also spoken to 21,000 youths in nine countries about the importance of education with her Dream Up, Speak Up, Stand Up project.

Speaking about the importance of girls’ education, she says, “Girl’s education is important because on the African continent, where there are not as many resources, the boys are the first [to get an education].

“The boys go to school and get an education while the girls stay at home. And those girls aren’t educated and have fewer options in life when they get older.”

Already named one of Business Insider’s “World’s Most Powerful People” last year,  Oduwole can teach a lesson to both the young and old about going after one’s dreams and making an impact.

Watch Zuriel Oduwole making an impact and living out her dreams here: