Five days after the decomposing body of Samuel, a 6-year-old African boy, was found floating on the shores of Barbate in Spain, hundreds of Spanish protesters gathered in the central square of Barbate, near Cape Trafalgar, Tuesday to mourn his death.

Many have described him as Spain’s Alan Kurdi, the 3-year-old Syrian refugee boy whose dead body was photographed on the Turkish shores in 2015, according to the BBC. 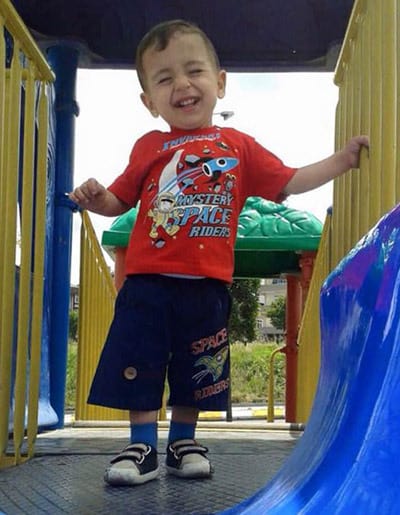 Alan Kurdi is seen in an undated family handout photo courtesy of his aunt, Tima Kurdi. Alan, his older brother Ghalib, and their mother Rehan died as they tried to reach Europe from Syria. Photo credit: Canadian Press/Ho

Samuel is believed to be a Congolese boy who died along with his mother when their inflatable boat sank as they attempted to travel in to Spain from Morocco through the Mediterranean Sea.

“We don’t know how many Alans, how many Samuels, or how many men and women lie at the bottom of the sea without their families knowing anything,” Rafael Lara of the Human Rights Association of Andalusia (APDHA) said.

At least 200 people participated in the protests to express their anger at the number of refugees and illegal migrants dying on the Spanish border. The protesters said these deaths are caused by the sectarian politics of European governments.

It is reported that the weak boat that Samuel and his mother were traveling on left the shores of Tangier, Morocco, late at night on 11 January with 11 migrants from sub-Saharan Africa on board.

A few days later, six bodies of five men and one woman believed to have boarded the boat were found floating on the southernmost tip of Spain.

Such incidents have become all too common in the Mediterranean Sea as thousands of illegal migrants continue to die while attempting to reach Europe on rickety boats that end up sinking.

According to the United Nations Commission on Human Rights, at least 3,800 people drowned in the Mediterranean in 2016, the largest number ever.

Despite numerous efforts by European governments to discourage illegal immigration, more people continue to make these desperate journeys, even though many of them do not reach the other side.

While most European countries have done their best to save lives in the Mediterranean, some Civil Guard border patrol officers in Spain have been accused of violating international law and preventing refugees fleeing from wars and persecution from accessing international protection.

In some cases, Spanish border authorities have been accused of attacking boats loaded with refugees, causing them to drown.