We are all familiar with the image of the American cowboy. The life of the cowboy has been the subject of countless works of fiction and popular culture. The rugged, gun slinging, tough-talking, horse-riding king of the Wild West decked in his blue denim and wide brimmed hat always made the perfect movie hero or protagonist of a novel.

Away from his role in the movies, the cowboy is actually an animal herder who traditionally tends cattle on ranches in North America while riding on horseback. But the work and life of a cowboy is not unique to America. Though not quite as romanticized as their American counterparts, Africa actually has some of the most-dedicated cowboys, men who are passionate about their cattle and make it their lives’ work to breed the most-prized cattle ever.

Here, Face2Face Africa takes a look at some of Africa’s most-successful cowboy tribes. 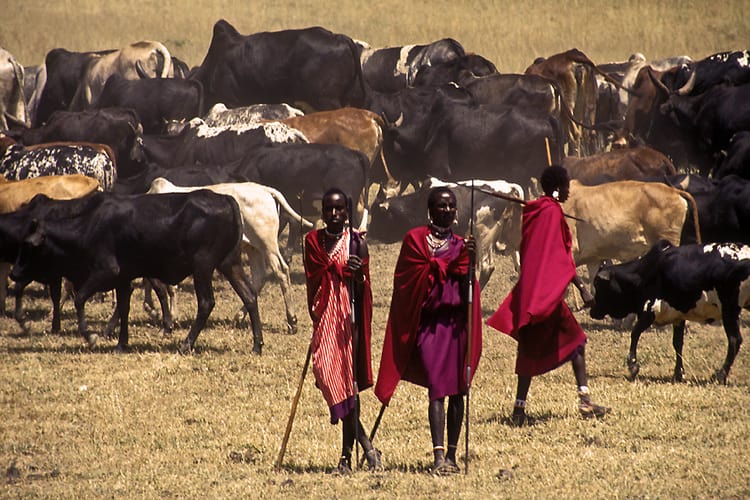 The Maasai are a semi-nomadic tribe of cattle herders that live in the areas around the great lake region of Africa and are one of Africa’s most-renowned cowboy tribes. Typically, the Maasai are found in the areas around southern Kenya and northern Tanzania. In Maasai culture, the welfare of their cattle is central to their daily activities, and they are so dedicated to their cattle they are known to say in greeting, “I hope your cattle are well.”

Although a number of them have embraced modernity, traditional Maasai lifestyle has changed little over the last centuries. The life of a traditional Maasai family revolves around its herd of cattle. And for good reason, Maasai cows serve as a store of wealth, provide the family daily subsistence with the yield of milk and blood harvested from the cattle, and are the ultimate source of pride for the cattle owner.

Just like the American cowboys, the Maasai have also adopted a martial lifestyle to protect their cattle. Therefore, they have earned the reputation of a fierce warlike tribe that would do anything to protect their cattle, with full-grown Maasai males typically strutting around armed with spears and machetes.  Their aggressive reputation is in order considering the fact that they herd their cattle through vast open ranges, which puts them at an even greater risk from cattle rustlers and attacks from wild animals.

Among the Maasai, the men herd and protect the cattle, leading them across vast ranges to forage for food while the women milk the cows. 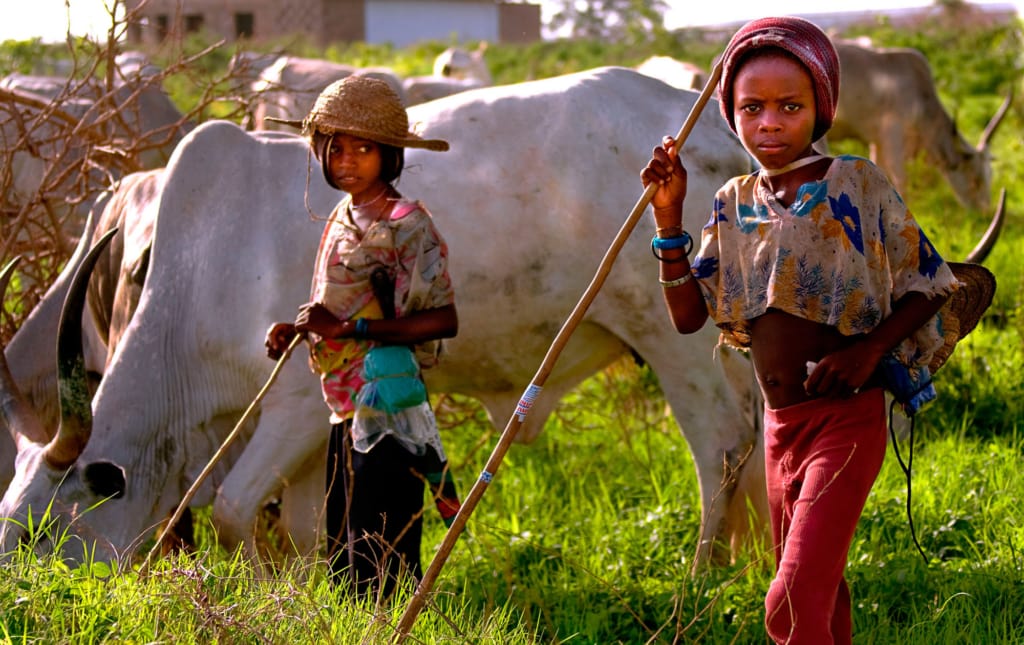 The Fulani people are known to be the largest pastoral, nomadic herding group in the world, making them the single “biggest cowboy tribe” on earth.

The Fulani can be found all over west Africa, central Africa, and parts of Sudan and Egypt. Not all Fulani’s are pastoralists, with a significant number of them having settled in to sedentary lives in towns and villages, but the majority — 13 million in all — are nomadic cowboys.

In the parts of Africa where they roam, the name Fulani has become synonymous with cattle herding since the Fulani have raised cattle for centuries. And in that time their traditional system of animal husbandry has evolved and withstood the test of time.

The Fulani, unlike the Maasai, do not restrict their pastoralism to cows alone: Fulani also keep goat and sheep and also raise other livestock, such as chickens and guinea fowls. The Fulani, however, maintain the martial lifestyle that is common to most pastoralists, ranchers, and nomads, alike. 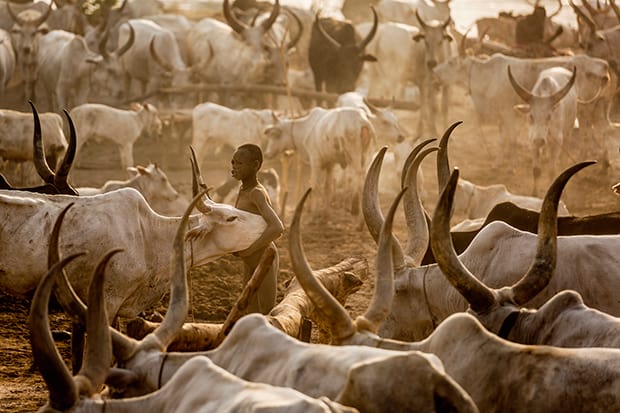 The Mundari are a small South Sudanese ethnic group, where cattle are a form of currency, wealth, and the ultimate status symbol. They are also used as a bride price with a prospective groom having to offer cattle to the bride’s family during the ceremony of marriage.

Like all cattle groups, the Mundari live with the constant worry of losing their beloved cattle to disease, drought, and marauding cattle rustlers. For the Mundari, that threat is even more amplified as they live under the constant danger of becoming casualties of the violence that continues to ravage their traditional grazing areas following the long-running war in the Sudan. The Mundari have responded by arming themselves with modern automatic rifles that can make them seem to the casual observer like a dreaded militia force. 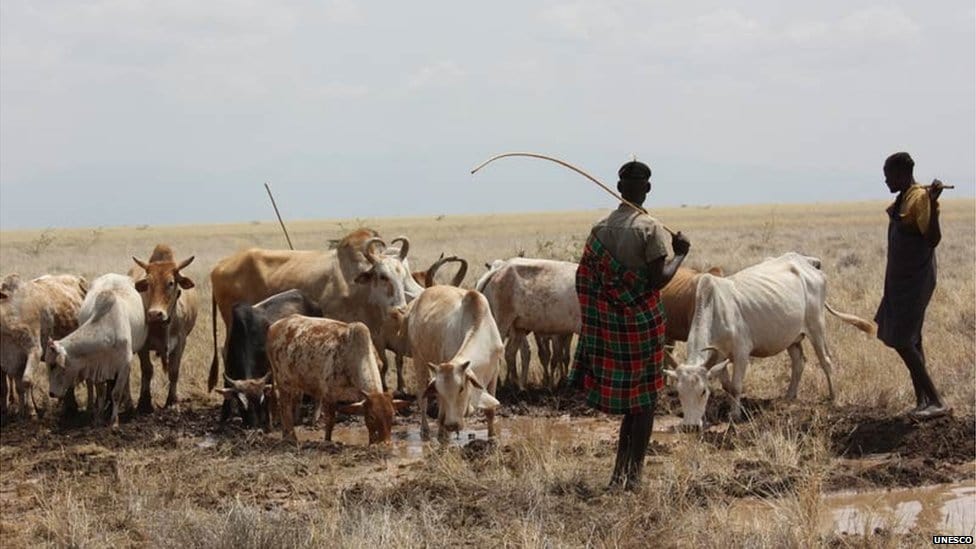 The Turkana people are a semi-nomadic tribe found in the Turkana district of northwest Kenya. While they primarily herd cattle, they also raise goats, camels, and donkeys. The livestock provide the Turkana with meat, milk, and animal hide and are a source of wealth and monetary value.

The Turkana are not exclusive pastoralists since they engage in some form of crop farming, but the variety of crop types is limited by the severe arid conditions of the Turkana homeland. The Turkana rely extensively on their cattle herd for survival; however, they do not revere their cattle nearly as much as the Maasai people.

Consequently, the Turkana are not as warlike or aggressive as the Maasai, and it is common to find increasing numbers among them, who have abandoned their traditional pastoral or nomadic life, settling for a sedentary lifestyle in villages and cities. 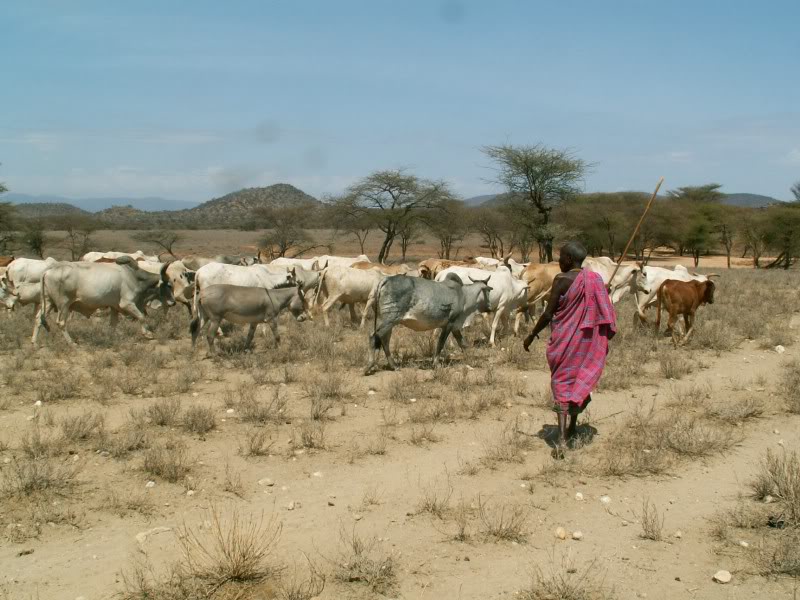 The Samburu are a tribe of semi-nomadic pastoralists who are close neighbours to the Turkana people. They are also related to but distinct from the Maasai. Traditionally, cattle are an important economic asset that provides the Samburu with dairy supplies, such as milk and meat. Blood is also periodically collected from live cattle. The modern Samburu diet now also includes grains, such as maize, which is made into porridge.

With the increasing adoption of crop farming by the Samburu people, these days, cattle is employed for use as draft animals, pulling carts, ploughs, and as beast of burdens for conveying farm produce.