This year’s World Water Day may have come and gone like any other global event, but the revelations made by international NGO WaterAid in its message to mark the day will linger on in minds of stakeholders in the water and sanitation sector, particularly in Africa. The organisation, which works in 37 countries across Africa, Asia, Central America and the Pacific Region, revealed that women in Sub-Saharan Africa spend a combined total of at least 16 million hours each day collecting drinking water. WaterAid also noted that walking, queuing and carrying jerry cans wastes time and hinders productivity for many girls and women.

World Water Day is celebrated every year on March 22. The global theme for 2016 was “Water and Jobs”, which highlights how a sufficient quantity of clean and safe water can change lives and livelihoods and even transform societies and economies.

In its first-ever “State of the World’s Water” report, WaterAid compared the cost burden of clean water among the poor in different countries. Minimum wage earners in the developed world spent as little as 0.1 percent of their income on water. In many developing countries, however, people who relied on a tanker truck could spend as much as 45 percent of their daily income to get just the recommended daily minimum supply of water. Even more disturbing, families relying on black-market water vendors in some of the world’s poorest countries spent up to 100 times as much as those reached by government-subsidised taps.

On this World Water Day, it is shocking to realise that a life essential such as water can cost a poor person in the developing world as much as half of their income, for an amount that is about one-third of average daily use in the developed world.” ~ Dr. Michael Ojo WaterAid’s country representative in Nigeria

Dr. Ojo also observed that lack of access to safe water has numerous impacts on work and productivity, noting that too many businesses are hit hard by staff absenteeism, turnover and low morale related to lack of access to clean, safe water in workplaces. Almost half of the world’s workers (1.5 billion people) are employed in water-related sectors; moreover, nearly all jobs depend on water and those that ensure its safe delivery. He identified financing and managing key jobs in the sector as obstacles that make it hard for countries to maintain water and sanitation systems that will secure the urgent progress required on the United Nations’ Millennium Development Goal 6: universal access to clean and safe water and sanitation by 2030.

“On World Water Day, we call upon our government and leaders around the world to take urgent action towards keeping the promises made in the UN Global Goals on Sustainable Development and ensure everyone is able to realise their right to access to clean water by 2030,” said Ojo. 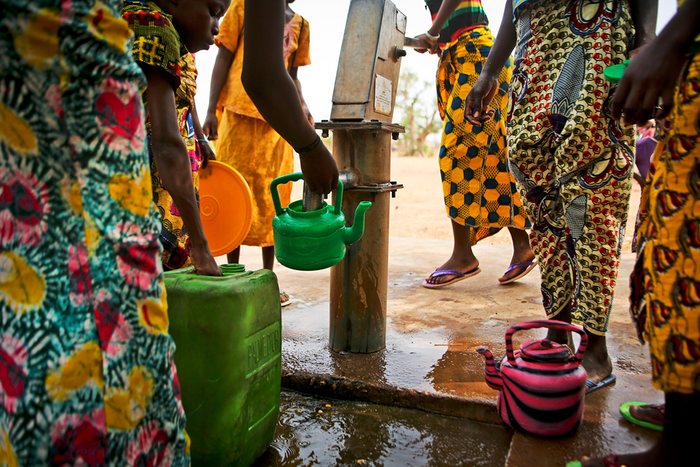 Focusing attention on the country where he is stationed, Ojo lamented that an estimated 31 percent of people in Nigeria are still living without access to clean water. The report also ranked nations based on rates of household access to water and on highest populations without access to water: Nigeria was ranked 17th of the top 20 most improved countries for water access over the past 15 years.

“Increased competition for water resources and climate change are only exacerbating the crisis, which along with lack of sanitation is responsible for the deaths of more than 68,000 children under five each year in the country. WaterAid in Nigeria is calling on government to take action to reach the estimated 57.7 million people in Nigeria still without access to clean water.”

The report added that the African giant is also one of the worst in the world for household water access, ranked third behind India and China among the ten countries with the greatest numbers of people lacking access to safe water. On the other hand, the report affirmed that Cambodia, Mali, Laos and Ethiopia have made the most progress in improving their populations’ water access; even in those nations, however, the poorest often pay the highest percentages of their income on water.