Olango’s sister, Lucy Peterson, called officers to the scene of the incident, when she observed her brother behaving strangely.

The Chicago Tribune reports that officers arrived at a parking lot next to a Mexican fast-food restaurant at about 2:10 p.m. and Olango, 38, was shot about a minute later.

Eyewitnesses say Olango was unarmed and had both of his arms extended in front of him as he begged police not to shoot him.

An official police statement, however, refutes claims that Olango had his hands in the air, saying that instead, the victim had his hands in a shooting stance and refused to comply with directives from officers that he should take his hands out of his pockets.

To back up their claim, police produced a still frame from video footage (pictured) that purports to show Olango engaged in a “shooting stance” with two officers. 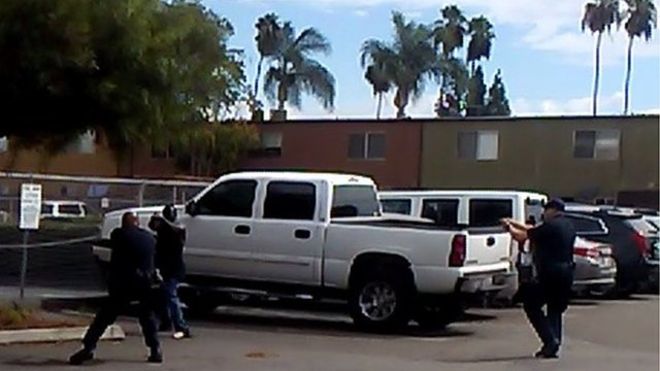 Olango was shot five times with live bullets by one of the officers while another shot him with an electric stun gun. One of the officers involved in the shooting, Richard Gonsalves, was charged last year with sexually harassing a colleague and demoted after a hearing in to the case. It is, however, not clear if Gonsalves was the officer who fired the stun gun or the live bullets.

An attorney representing the deceased’s family told reporters that Olango was having an emotional breakdown and his reported erratic behavior came after he heard the news about the death of his best friend.

The attorney has called on the police to release the complete video of the incident.

On Wednesday, the police issued a statement, saying, “The object that Mr. Olango drew from his pant pocket and pointed at the officer is a vape smoking device,” with a police spokesman adding that officers had recovered the vape from the scene as evidence.

Olango, a furniture worker, who has been described by those who knew him as “a good man and a great father,” was a former refugee who had come to the United States from Uganda decades ago in pursuit of his dreams.

While Olango’s sister acknowledges that he had mental health issues, she says she can’t understand why that was reason enough for him to be shot, saying at a recent press conference, “I called you to help me but you killed my brother…. Why couldn’t you guys tase him? Why, why, why, why?”

Watch footage of the post-shooting here:

The shooting of Olango comes on the heels of the fatal police shooting of Keith Scott in Charlotte and Terence Crutcher in Oklahoma. Public outrage, particularly within the African-American community, is at an all-time high over the continued killings of Black men by law enforcement officers who are paid to protect them.

That outrage has manifested calls from the Black Lives Matter Movement for sweeping reforms in the criminal justice system by activists as well as protests that have sometimes turned violent in several cities across America.

Sadly, the ugly cycle of the U.S. police shootings of unarmed African Americans followed by demonstrations by aggrieved citizens followed by half-hearted calls from political leaders for peace will continue in to the future until America directly confronts the issue of race relations that is at the root of the problem.

Data from the Guardian’s Police Killing Data Base shows that 885 people have been killed by the police in 2016 alone. The majority of that number is unarmed, mentally ill, and people of colour.

The Guardian report also reveals that African Americans and Native Americans are more likely to be shot by the police than people of any other racial group, with the latest figures putting the number of Black people shot dead by U.S. police at 194.

Even worse is that there have been few convictions for law enforcement agents charged with deadly, on-duty shootings of unarmed persons. Many trials so far have curiously led to officers walking away free or getting off with light sentencing from the jury.