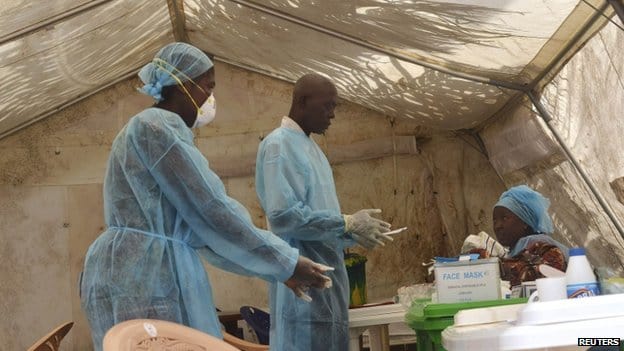 There is no doubt that the world is facing the worst Ebola outbreak ever! The disease has shown no signs of abating and continues to spread. According to the World Health Organisation, the disease has now infected at least 1,093 people. Most recently, in addition to already hit countries Sierra Leone, Liberia, and Guinea, the Ebola virus has been reported in Africa’s most-populous nation, Nigeria.

RELATED: Ebola: The Deadliest Outbreak Ever

Last Tuesday, a Liberian man reportedly boarded a flight from his home country and landed in Lagos, Nigeria. While in-flight, he was reported to have been running a high fever and vomiting. These symptoms piqued the interest of the crew and the airport authorities were notified prior to their arrival.

He was subsequently isolated and quarantined at the airport, and after testing him, he was found to be positive for the Ebola virus.

This man died from the disease on Friday. This is the first case of Ebola to be reported in Nigeria since the outbreak. People who may have been in contact with him are also said to be undergoing tests.

Without mincing words, Ebola is one of the world’s most-deadly and contagious diseases, and again, I re-iterate the fact that we, as individuals, need to step up our own preventive measures.

Governments and international health bodies are commendably at the forefront of the battle against Ebola, but at the end of the day, it boils down to you and me avoiding catching the disease.

You see, this Liberian man that died of Ebola in Nigeria was said to have recently lost his sister to the same virus in his homeland, according to health officials. There were worries over his resumption at work after his sister died, but he claimed he had not had any contact with her.

Based on his explanation, he was asked to go back to work. He was, however, later asked to stay home for 21 days and advised not to travel, so his health could be monitored. Therefore, it is unclear how he managed to board a flight to Nigeria to attend a conference.

Please, prevention is better than cure.

The only good news in this grim Ebola outbreak is the fact that it is preventable, so once again, Face2Face Africa will remind you of the things we need to know and the simple steps we can take to avoid contacting the disease:

– The major hosts of the virus are five species of bats, but monkeys, apes, and humans are easily infected and killed by it.
– Symptoms can start within 2 to 21 days of contact with the virus.
– Symptoms initially mimic the common flu: headache, fever, fatigue.
– Late symptoms include significant diarrhea, vomiting, bleeding from body orifices, and death.

What Can You Do To Protect Yourself?

• WASH YOUR HANDS as regularly as possible, using soap! Use hand sanitisers liberally too, especially after shaking hands with or touching people.
• Do not play with monkeys and baboons. Do not share food and fruits with them as well, i.e., giving them food to eat and eating leftovers yourself.
• Avoid touching or eating meat of bush animals, especially apes and bats.
• Cook your foods and meats very well. As enjoyable as they may be, this is not the time to have “rare steaks.”
• Be on the lookout for symptoms, such as fever, sore throat, muscle pains, and headaches in yourself. If you do get them, present yourself at the hospital immediately for assessment and treatment.
• Do not share sharp objects with people, e.g., razors, needles, and clippers.
• Avoid people who are suspected to have the disease and items they may have used.
• Avoid locations of recent or suspected infection/outbreak.
• Quarantine infected people for treatment in hospitals.
• Don’t touch an infected person or their body fluids, e.g., blood, vomit, feces, urine, and genital fluids. If you are a medical personnel and you must, ensure you use proper barrier methods to protect yourself before you do.
• Avoid bodies of people who have been suspected to die from the infection.
• Infection control inside and outside of medical facilities should be optimal. This is achieved by using disposable barrier protection methods, such as using double gloves, fluid-impermeable gowns, face shields with eye protection, and coverings for legs and shoes.
• Mourning behaviors, such as holding, hugging, and crying over corpses, should be absolutely discouraged. I know this sounds a tad harsh, but what must be done must be done.
• Traditional burial rites, such as bathing or embalming the dead, should also be discouraged and stopped.
• Prompt disposal/burial of victims’ bodies should be instituted immediately after proper disinfection of the bodies, their homes, and all that will be used for their burial.
• Find out what your regional Ebola hotline is and report any suspicious cases immediately.

What Can You Do If You Suspect You Are Infected?

1. Stay away from others so that you don’t infect them.
2. Be extremely careful with your bodily fluids.
3. Go to the hospital immediately!

All three steps can be done simultaneously!

While there are medical interventions that can help greatly in the early stage of the disease, there is no complete cure or vaccine for it. Awareness and prevention is therefore key. Read this, work with these guidelines, and share information about Ebola with people around you. That person you educate today may be the one to save hundreds of people from the disease.

RELATED: All You Need to Know About the Ebola Virus