There was jubilation in a South African court on Wednesday when two white farm workers who pushed a teenage boy out of a moving van after accusing him of stealing sunflowers were convicted of murder.

Pieter Doorewaard and Philip Schutte were found to have killed Matlhomola Mosweu on April 20 last year, after claiming they caught him taking a plant from their employer’s farm in Coligny, a remote northwestern farming community.

Doorewaard, 27, and Schutte, 34, had claimed that the 16-year-old jumped out of their vehicle while they were taking him to the local police station after catching him stealing from the field.

According to reports by news site The Week, the defence called on the court to drop all charges against Schutte and downgrade the charge against Doorewaard to “culpable homicide” (similar to manslaughter), but the sole eyewitness of the incident, Bonakele Pakisi, testified that Mosweu was pushed from the moving van.

A postmortem report had found that the teen broke his neck when he fell from the van. Doorewaard and Schutte have been found guilty of “murder, kidnapping, intimidation, theft and pointing of a firearm”.

Judge Ronnie Hendricks, during the hearing at the North West High Court in Mahikeng, said: “It is difficult to believe the assumption that the deceased jumped from the van.

“It makes no sense. Why he would all of a sudden, and for no reason, after being so cooperative, jump? I am of the view that their [the accused’s] versions are not reasonably possibly true and are rejected.”

Doorewaard and Schutte will remain in custody until they appear again on Thursday for sentencing.

Amidst calls for a harsh sentence, the mother of the murdered teenager said she wants to see the two spend the rest of their lives behind bars.

“Even if they die in jail, it’s fine, they killed my child,” she was quoted by South African media, Eyewitness News.

When news of Mosweu’s death reached many last year, it sparked off a mass violent protest in Coligny, leaving six houses and three trucks torched, as well as, looting of several white-owned businesses in the town.

Racial inequality is inherent in South Africa after two decades of the end of white-minority apartheid rule, with cases of racism making headlines in recent years as whites continue to own most of South Africa’s land.

Mosweu’s death reminded many of the numerous racially charged incidents that have occurred between white farm owners and poor black farmhands.

It will be recalled that in 2016, two white farmers in eastern Mpumalanga province forced a black man they accused of trespassing and stealing copper cables into a coffin. 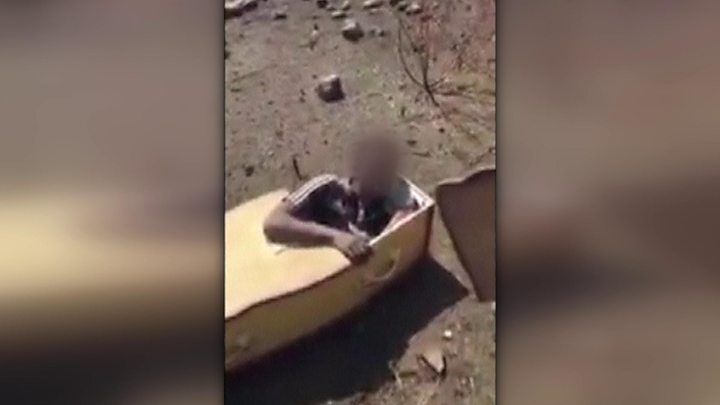 A 20-second video of the incident was widely circulated on social media, showing the victim, Victor Mlotshwa, “cowering inside a coffin as one man pushes the lid down and the other threatens to put petrol and a snake inside,” news site The Guardian reported, sparking anger.

The accused, Theo Jackson and Willem Oosthuizen were sentenced to 14 years and 11 years respectively.