While many know her as the former winner of Miss South Africa beauty pageant, Peggy-Sue Khumalo has made history as the first black woman to head the wealth unit of South Africa’s Standard Bank.

Khumalo, who had been working for Investec for 17 years, will take over the role at the bank in 2019. The wealth division handles short- and long-term insurance, asset management, pension-fund operations and fiduciary services. Her appointment was announced by Margaret Nienaber, Standard Bank Chief Executive for Wealth.

“Peggy-Sue has distinguished herself as an exceptional industry specialist over many years in the financial services industry. Her knowledge gathered both here and abroad will come to bear as she executes on Standard Bank’s Wealth strategy. Wealth Management is a far broader concept today than it ever was, and Standard Bank is well positioned to drive the vast array of wealth management and insurance solutions needed to make a difference in the lives of individuals of any age, and any stage of their life – for themselves, their businesses and their communities. We welcome Peggy-Sue and look forward to working with her as we continue to enable our client’s legacies and dreams.”

Khumalo was the winner of Miss South Africa in 1996, becoming the third black woman to earn the crown after Jacqui Mofokeng and Basetsana Makgalamele. 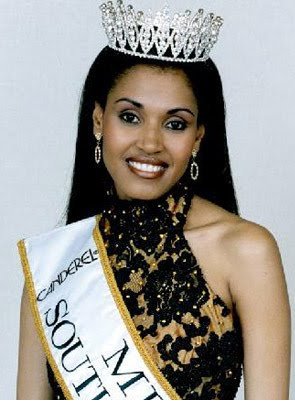 For Khumalo, entering the beauty competition was not by fluke: it was a way for her to get herself and her mother, a domestic worker, from poverty that had stopped her from advancing her education.

“But I have a fighting spirit; I’m a go-getter. When I saw Basetsana Kumalo and Jacqui Mofokeng win the Miss SA competition, I saw beauty competitions as a way out for my mother and me,” she said in an interview.

She earned a scholarship from then-President Nelson Mandela in collaboration with Stephen Koseff (CEO) of Investec Bank.

“He had great faith in investing in young South Africans who would contribute to our country’s future,” Khumalo said of the country’s first black president.

She headed to the UK to study Economics and Political Science at the University of Manchester before joining Investec as a Fixed Income Analyst. In 2004, she earned a Masters degree in Economics and in 2007 headed back home to work at Investec South Africa, where she went up the ladder to become an executive.

Away from the banking sector, Khumalo set up the Peggy-Sue Khumalo Honorary Scholarship to help girls from rural areas. She also was an honorary member of various organisations and worked with a number of charities.

Khumalo is married to radio presenter Xolani Gwala and has two daughters.