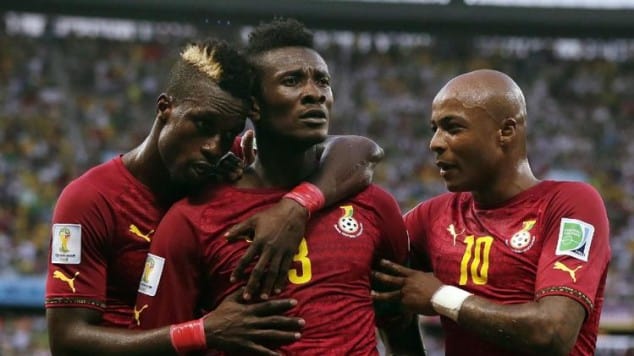 This year’s World Cup has not only been characterized by surprises but a lot of drama, from head clashes to bites to alleged match fixing, and more. But topping this year’s list of drama is Ghana’s $3 million World Cup fiasco, which has somehow gotten Hollywood’s attention, reports the Guardian.

Award-winning writer Darryl Wharton-Rigby is planning a Hollywood thriller spun off from the true and bizarre story of Ghana’s World Cup cash.

Ghana’s President, John Dramani Mahama, was forced to send a plane containing $3 million to Brazil for the players to split or witness the team go on strike. According to the team’s coach, Kwesi Appiah, the players were supposed to receive the money before the World Cup began for appearance fees.

The Black Stars, who at one point refused to train due to lack of payment, subsequently lost their final group match to Portugal 2-1 and exited the competition.

As for the film, the story centers on a courier tasked with bringing the $3 million (£1.76m) across the Atlantic to Brazil in an effort to stop the Ghanaian football team from quitting the competition due to lack of pay. Eventually, the $3 million is stolen after the courier is ambushed. He then has fewer than 12 hours to recover the money or face the wrath of his employers (and presumably the Ghanaian footballers).

And even though the movie is based on real-life events, fictional elements will be incorporated to further spice up the proposed film.

“The world has soccer fever and Hollywood has caught it,” said Wharton-Rigby, a former staff writer for “Homicide: Life on the Street,” the celebrated Emmy-winning TV series from producer David Simon, which predated the even more successful “The Wire.”

The screenplay has been optioned by U.S. production company Bugeater, whose founders Dan Mirvish and Barry Hennessey will produce the film.

Hennessy, an Emmy winner for reality TV show “The Amazing Race,” said, “I’ve shot extensively in both Ghana and Brazil, and this is a perfect project to capture the raw energy that both countries have to offer.”

Wharton-Rigby’s 1998 film “Detention” won the best director prize at the Urban World film festival. The thriller is the second football-related project to emerge in the past few weeks, following news that Hollywood studio Warner Bros plans to capitalize on U.S. World Cup fever with a remake of “Escape to Victory.”