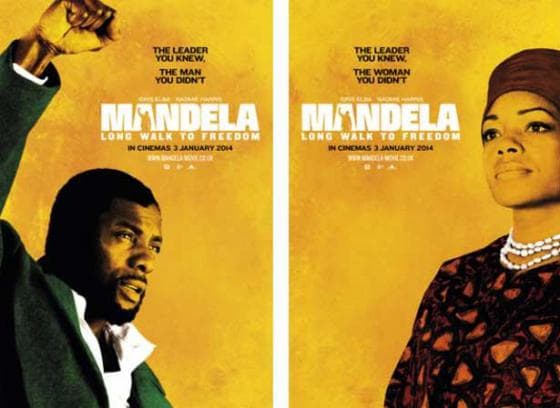 The clip consists of a sparse score and contemplative voice-over from Elba's Mandela, accompanied by the visual of an airborne tracking shot following Elba while he walks through a field in South Africa.

"I have walked a long walk to freedom," narrates Elba as Mandela. "It has been a lonely road and it is not over yet. No one is born hating another person because of the color of his skin. People learn to hate. They can be taught to love. For love comes more naturally to the human heart."

The film, based on Mandela's 1994 autobiography "Long Walk to Freedom," chronicles Mandela's life as he changed the world through his work as an anti-apartheid revolutionary and subsequently as President of South Africa. The biopic is directed by Justin Chadwick, who helmed the films "The Other Boleyn Girl" and "The First Grader."

"Mandela: Long Walk to Freedom" also marks Elba's most prominent leading role on film. The Hollywood star has already been tipped as favourite to win an Oscar for the part in 2014. Elba can be seen in "Pacific Rim" this summer and has had roles in films like “Obsession”, "Prometheus" and "Thor." Elba is the latest in a long line of actors who have portrayed the Nobel Peace Prize winner, including Sidney Poitier, Dennis Haysbert and Morgan Freeman. "Skyfall" actress Naomie Harris portrays Winnie Mandela in the film. Remarkably the film is mainly a British affair.

The star  has never met the Freedom fighter but said: ‘It meant so much to me, it's such a massive opportunity to be part of a true legend's life, and more importantly, the film re-educates people on this legend’

‘I never met Mr. Mandela because he was very ill, so our interpretation of him was without his personal influence. But the script is such a good script, and obviously it comes from his book, and the book speaks for itself.’

The  real Mandela has been struggling  with his health issues in a Pretoria Hospital for the past five weeks. This is however not the first time the 94 year old has been confined to a hospital bed this year. Elba also admits he ‘looks nothing like him’ but judging by the trailer he certainly has studied Mandela’s voice.

As for Harris, playing Winnie Mandela was the ‘toughest thing’ she’s ever done.
She explained: ‘For me, that was the most challenging role that I've ever played and I absolutely loved playing her – right from this innocent woman to this warrior figure. That journey for me was the most challenging that I've ever done and I've enjoyed that the most.’ The film, Mandela: Long Walk to freedom is set to be released in cinemas on January 3RD 2014.