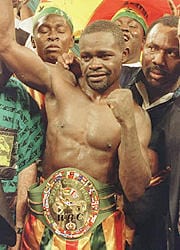 Azumah “The Professor” Nelson, former WBC world champion, put African boxing on the map KO after KO and became the only boxer from the continent of Africa to date to be inducted into the International Boxing Hall of Fame. Azumah Nelson will make his first appearance at New York’s famous Gleason’s Gym on June 13, 2011, from 6-9pm for a meet and greet charity auction, benefiting the Azumah Nelson Foundation’s “Mentoring for a Brighter Future” building project in Akuse, Ghana- which marries sports & education.

The Azumah Nelson Academy is being built on 50 acres of land acquired by Azumah Nelson to give back to the young people & future of Ghana, as he calls on the help of the global village to raise every child by mentoring for a brighter future. Azumah “The Professor” Nelson will also be making his first appearance to the International Boxing Hall of Fame since he was inducted in 2004, for a June 11, 2011 ring side chat to bring international awareness to the Azumah Nelson Foundation & its efforts, along with welcoming the new inductees who include: Mike Tyson, Julio Cesar Chavez, Sylvester Stallone and Kostya Tszyu.

When asked if Champ as vibrant & powerful as he looks minds being called a senior amongst other boxing champs like MikeTyson, Azumah laughed & said:

“In my country being called a senior is great because it gives you a certain reverence amongst the next generation in a passing of age ritual that all cultures need for growth & the passing down of tradition. So, Yes I am happy to be part of the senior class & to have the opportunity to extend the Azumah Nelson Foundation’s motto of ‘Mentoring for a Brighter Future’ to the IBHOF by serving as a mentor to the new class of inductees as well as future inductees from Ghana & other parts of the world. This new classis special to me because many of my history making career highlights were with great fighters & promoters of their respective nations- USA, Mexico & Australia. The UN has declared 2011:International Year of African Descendants and this year's theme of Africa Day is “Africa and the Diaspora, so I want to reach out more to my brothers & sisters in the Diapora in unity and working together to give all of our children all over the world a brighter future. ”

Azumah Nelson holds his title of “The Professor” to heart, as he has made it his life’s mission to educate the children of the black star nation of Ghana, West Africa. Azumah Nelson has dedicated all proceeds from his new documentary entitled “Zoom Zoom -The Professor”, which made it’s US debut at the National Geographic Headquarters in Washington DC on April 2, 2011, along with his book Azumah Nelson, The Professor: 12 rounds of Boxing & Life, to raising money for the Azumah Nelson Academy building project.

Azumah Nelson holds the high reverence of being dubbed Mohammed Ali of Africa, a man who is bigger than life to most Africans and boxing fans throughout the world, whom he has inspired not only through his globally recognized accomplishments, but also through his compassion & dedication to giving back to his nation & to Africa as a whole. Today hip-hop artists from Africa name check him in their raps & young boxers from Ghana like Joshua Clottey, who has garnered international fame, fight in his name & shadow because he paved the way to respecting the strength, power & intelligence of the African fighter.

June 13, 201l, join Azumah “The Professor” Nelson and friends of the Azumah Nelson Foundation such as: actor Jeffrey Wright, boxing icons: reporter Burt Sugar and academy award winning Million Dollar Baby boxing trainer, Hector Roca amongst others who will be in attendance as he makes history with his first appreance at Gleason’s Gym in Brookyln, NY