Colin Kaepernick, American football quarterback and free agent, just announced via Twitter that he has reached his #MillionDollarPledge campaign which he started in September 2016 to give back to charities focused on helping their communities.

I am happy to announce I have completed my #MillionDollarPledge. For the final #10for10 joining me is my brother @usher! He is donating $10k to match my $10k for $20k for H.O.M.E from Lithonia, GA. Head to https://t.co/aK6dK9NZZA for a complete list of my Million Dollar Pledge! pic.twitter.com/WiSAJePPcB

Colin Kaepernick has been “unemployed” since he officially opted out of his contract with the 49ers on March 3, 2017. He became a national figure when he opted to kneel during the U.S. national anthem in September 2016 in protest of police shootings of black men Terence Crutcher and Keith Lamont Scott, explaining in a post game interview that, “I am not going to stand up to show pride in a flag for a country that oppresses black people and people of color. To me, this is bigger than football and it would be selfish on my part to look the other way. There are bodies in the street and people getting paid leave and getting away with murder”.

Still, though unsigned, Kaepernick has been silently donating to over 40 charities these last two years. To further his cause, Kaepernick embarked on the #10for10 project where he teamed up with other celebrities to spotlight causes they are passionate about. Artists Chris Brown, Jhene Aiko, Snoop Dogg, Joey Badass, Meek Mill (who donated while in jail) and TI, actor Jesse Williams, and athletes Serena Williams, Kevin Durant, and Steph Curry all donated $10,000 which Kaepernick then matched. In the final day of the campaign, singer/songwriter Usher Raymond donated $10,000 to the charity, Helping Oppressed Mothers Endure, to help single mothers facing hardship. 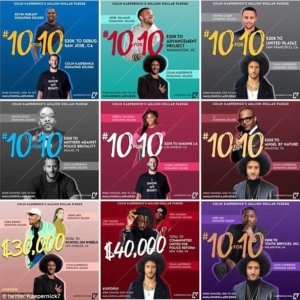 In 2017, Kaepernick filed a grievance against the NFL alleging that its owners have colluded to keep him out of the league. Later that same year, rapper-mogul P.Diddy revealed his plans to buy an NFL team and sign Kaepernick, a plan the quarterback supports.

Kaepernick also runs the youth-centered Know Your Rights Camp campaign within the larger Colin Kaepernick Foundation to “fight oppression of all kinds globally through education and social activism”. Kaepernick also visited Ghana last year in an effort to trace his ancestry.