Kenyan runners have once again put their country on the map, after dominating Sunday’s London Marathon, with Mary Keitany breaking the women’s-only world record for crossing the line in 2:17:01 hours.

The 35-year-old Mother of three was 41 seconds faster than the previous record holder, Paula Radcliffe, a four-time British Olympian who broke the record in 2005.

Throughout the race, Keitany produced an exemplary display by maintaining the lead despite the grueling track across the streets of London.

She broke free from the leading pack after the first mile of the race and maintained the momentum all the way to the finish line:

In an interview with the BBC after the race, Keitany said the weather was favorable, allowing her to maintain the right pace throughout the race.

“It was a great day for me. It was really amazing, to run the best time,” Keitany said. 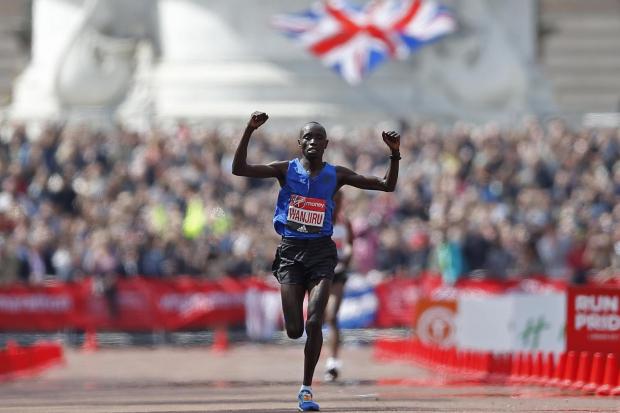 In the men’s race, 21-year-old Kenyan Daniel Wanjiru was not ready to take home anything short of a gold medal, so he had to hold off the challenge of Ethiopia’s finest Kenenisa Bekele and win the race in 2:05:48 hours.

Wanjiru, who’s not related to the late-2008 Olympic champion Samuel Wanjiru, struggled to keep pace with the leading pack of four until 21 miles, when he broke free and went for the victory.

But before he could call it a day, the stubborn Bekele suddenly begun to pick up and almost overtook him at the Embankment tunnel, with only 2 miles remaining:

Luckily, the seemingly worn out Bekele could not produce the last kick, despite having narrowed the gap to only eight seconds, to overcome Wanjiru, who is 13 years younger than him.

“In the beginning, the race was very fast and we were inside world record pace. It was the pace I was preparing for,” Wanjiru told the BBC.

It was the third time Kenyans captured sweeping gold medals in the marathon race, after their impressive performances at Paris and Boston marathons.

Congratulating all the Kenyan athletes who participated in the marathon, Kenyan President Uhuru Kenyatta said they made Kenya proud:

I congratulate Mary Keitany for her #LondonMarathon win and for breaking the women-only marathon World Record! You have made Kenya proud

The Kenyan Minister for Youth and Gender Affairs Sicily Kariuki also praised Keitany for her win, saying it was “a true spirit of a Kenyan woman.”