Police in Kasungu, central Malawi, recently used teargas to disperse a crowd of angry parents who destroyed a house and other properties belonging to an unnamed local businessman for allegedly bewitching their children.

The irate parents accused a businessman at Chinkhoma Trading Center March 28th of casting a spell on their children who have allegedly been suffering from a strange mental disorder, according to Nyasa Times.

Confirming the incident, police spokesperson Edna Mzingwitsa said the angry parents targeted the businessman, after their children claimed to see him in their “illusions.”

The disorder has reportedly caused the children to behave like they have been possessed by demons, with bouts of unconsciousness and appearances of being “mentally disturbed.”

Police had to move in quickly to prevent the angry crowd from causing more damage to the businessman’s property. The accused was not hurt during the incident. 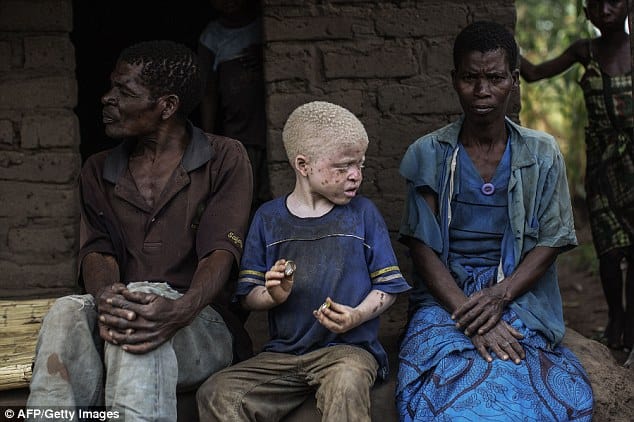 An albino boy sits between his two parents at their home in Malawi. Photo credit: Daily Mail

In recent years, cases of witchcraft in Malawi have increased exponentially, with some people going to the extent of killing fellow human beings, especially those with albinism who are reportedly being hunted to extinction, in order to sell their body parts to witches and traditional healers.

The situation is reportedly so dire that many albinos have been forced to flee the country or seek refuge in local orphanages.

A significant number of Malawians believe in witchcraft and often see evidence of bewitchment in every misfortune, including terminal illnesses, poverty, sudden deaths, and many more.

And although many people in the country still look for solutions to their problems in witchcraft, cases of violent witch-hunts are very common, with those suspected of practicing the vice often being subjected to physical attacks, stigmatization, banishment, torture, and even death.

Unfortunately, the majority of the people who are accused of practicing sorcery are those that are least able to defend themselves, including the elderly, children, and the handicapped.

According to the United Nations International Children’s Emergency Fund (UNICEF), children often accused of witchcraft are subject to physical and psychological violence, first by family members and their friends, then by the society in general.

“Children accused of witchcraft may be killed, although more often they are abandoned by their parents and live on the street,” UNICEF says in a report published in 2010.

In an effort to survive and escape the appalling living conditions they find themselves in, most of these children end up becoming drug addicts and victims of sexual exploitation.

Regrettably, this practice is widespread across sub-Saharan Africa, with some prominent individuals, including politicians and business people, being accused of using witchcraft to protect themselves and their businesses.

With the coming of new religions and civilization in general, many believed that these backward beliefs and practices in Africa would disappear over time, but unfortunately, the current situation suggests the contrary.