Kenyan Pastor Robinson Karumba who believes faith can do all things, including bringing the dead back to life, recently caused a scene at a mortuary in Embu town, Kirinyaga County, with his prayers for God to resurrect his dead wife.

Pastor Karumba’s late-wife, Polly Rosa Ng’endo, 38, who was also a preacher at Eagle Wings Prophetic Ministries with her husband died on Sunday of tuberculosis-related complications at the Mwea County Medical Centre.

By Wednesday, Pastor Karumba was accompanied by at least 10 of his members when he told workers at Gakwegori Funeral Home to release the body of his wife so they could offer special prayers that would bring her back to life, reports Nairobi News.

Pastor Karumba and his flock then proceeded to take the body of his late-wife in to a secluded room within the mortuary, laying it on a table and covering the partly naked corpse with anointing oil. 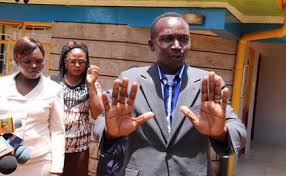 Pastor Karumba told mortuary workers that his wife was merely asleep and by the end of the prayer session he expected to walk out of the mortuary with his wife alive, well, and breathing.

“We believe she is not dead, but merely resting. She is a believer like me and has preached in many places and with prominent preachers. I had to do what I have always preached. Jesus was called to Lazarus’ home after he had died for four days.

“Even my daughter said my mother will come back of Wednesday, and that is why I came today. We are playing guitar and other instruments because she was a musician,” Pastor Karumba said.

Some mortuary workers who spoke to reporters say they have never before witnessed anything quite like Pastor Karumba’s action. They also offered muted skepticism about his efforts.

“We don’t believe in what they are doing, but we have allowed them to proceed with their prayers. They have been praying for the past three hours and they seem indefatigable,” Gladys Murugi, a mortuary attendant, said.

As a demonstration of his faith, Pastor Karumba also brought with him a change of clothes for his wife.

“I brought clothes and a pair of shoes for her to wear. My uncles are preparing for a burial on Saturday, but they are wrong because on that day we will be celebrating her resurrection and not burying her.

“Back at home, people have been preparing for the burial. If she resurrects, Saturday would be a thanksgiving ceremony. We will be marking her resurrection,” he said.

Pastor Karumba maintains that he will not be heartbroken if his wife doesn’t wake up.