After being elected into the Russian parliament in 2010, Jean Gregoire Sagbo soon established the household name as the Russian Obama, a name that did not sit well with him but one that he cannot seem to escape or avoid.

Jean Gregoire Sagbo became the first elected Black official of Novozavidovo, a small town in Russia with an estimated population of about 10,000 people with just a small number of Blacks. The win is said to be the fairest run campaign and election in a town where many politicians buy votes to win seats. He defeated 5 other opponents for the town council post winning on a 39.9 percentage. But before winning the seat, Sagbo did not find his life in Russia as easy as he had hoped it would be.

Born in Benin, Jean Gregoire Sagbo immigrated to Russia in 1982 to study business and economics with the aim of returning to Benin to help his underdeveloped country. He recalls being called a monkey several times by Russians and being cheated at the market due to his ignorance.

While studying, he met his wife Svetlana. Svetlana suffered a lot of prejudice due to her choice of partner. She was sacked from a communist youth organisation when she refused to break up with Sagbo. Her father ordered her to stop seeing him several times but Svetlana stood firm in her decision to be with Sagbo. Her mother is also known to have thrown a self-pity party after hearing that her daughter had married Sagbo and was expecting their first child in 1984. 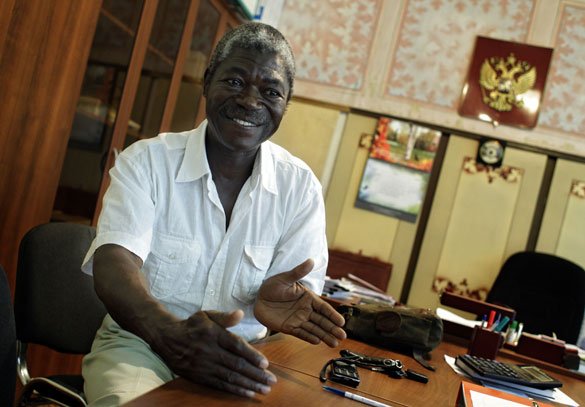 Sagbo returned to Benin with his family in 1986 to fulfil his promise of helping his country but he fell into trouble after openly opposing the government.

Sagbo was jailed after being charged by the government for spreading anti-socialist propaganda while he was studying in Russia. While in prison, he was chained down for months with iron shackles on his ankles which caused deep marks that are still visible years after his escape.

He returned to Russia with his family in 1989 after escaping from prison and moved to the small town of Novozavidovo where he still suffered a lot of discrimination. The racism did not stop Sagbo from doing good as and when he could and he would spend money on important implementations for the town.

Soon, Sagbo was accepted among the people and later encouraged to run for the position by the head of the town council.  He has been successful in tackling corruption in the town, ensuring free and fair elections and turning abandoned buildings into playgrounds. He served for 5 years. Aside from being a politician, Sagbo is also a real estate agent.