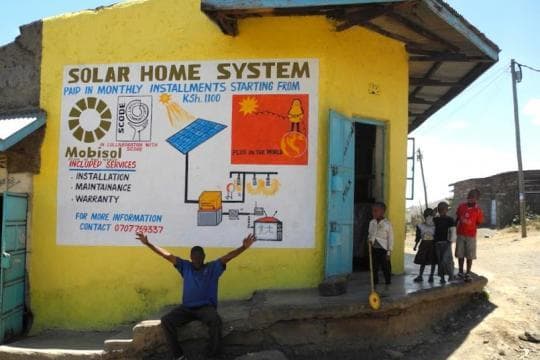 For Africans who live far from large cities or towns that use a power grid for electricity, using solar panels to gain the resource of electricity is vital. Across Eastern Africa, solar panel availability shows signs of expanding by way of a mobile phone payment system that is steadily developing.

A recent report focuses on this growing business model throughout Tanzania and highlights that the purchase of solar panels is a significant buy for many in impoverished rural communities.

More from The Guardian:

Solar energy provides a cheaper and safer alternative to diesel generators, kerosene lamps, and old batteries, but a key barrier to access is cash.

“A solar home system costs money that is not available in cash to the people we sell it to, so you need a microloan,” says Duveau, head of business development at Mobisol.

The cheapest 10 watt solar system can power a small radio, one to three lamps and charge up to two mobile phones for $9 a month. But is that still too expensive? Deveau says there is demand for an even more expensive system.

“With big systems you can charge 10 mobile phones, you can run a TV for a village cinema, you can run a fridge to sell cold beers, you can earn $75-100 a month from this – suddenly your customer can become an entrepreneur.”

What Mobisol is allowing customers to use is what’s being called “mobile” money,” which is better known as mobile banking. The concept of paying off a Mobisol system via a 36-month incremental plan has attracted new buyers, but the solar panels are costly: the Mobisol system can cost more than $1,000 US.

Still, Kenya and Rwanda have also taken the mobile money plunge, and the model is being used for a variety of resources like water pumps. However, there are concerns among residents that may have a lack of trust in the new technology. There is also questions regarding who maintains and protects the customer data intact for Mobisol and other similar companies like Grundfos Lifelink.

Both Mobisol and Grundfos Lifelink plan to expand their services by next year.