Mohammed Abubakar Masaba, a Nigerian polygamist and Islamic scholar who became famous for marrying at least 86 wives during his lifetime, has died at the age of 93.

Masaba died at his home in Bida, 200km northwest of Nigeria’s capital, Abuja, Saturday, due to an undisclosed illness, reports the Daily Trust. His personal assistant, Alhaji Mutairu Salawudeen Bello, who confirmed the death to the press, said Masaba was an Islamic scholar and alternative healer.

“From Allah we come, to Him we shall all return; we announce the death of Alhaji Mohammed Abubakar Bello Masaba this afternoon. He was aged 93 and died after a brief illness,” Bello said.

A saddened Bello said that his late-boss had a premonition of his death and was prepared for it.

“He died at the age of 93, and anyone who lives to that age should be expected to have health challenges,” Bello said adding, “Baba wouldn’t take medicine and wouldn’t advise people to take medicine. That is how he lived. His family is intact. All his 86 wives were around him when he died.”

In 2008, Masaba found himself at the center of controversy over the sheer number of wives he had married. He was arrested by the police and charged in court, following complaints from some Islamic organisations that his marriage to 86 women was a contravention of Islamic law, which allows a maximum of up to four wives. Therefore, his marriage to the remaining 82 wives was seen as unlawful. 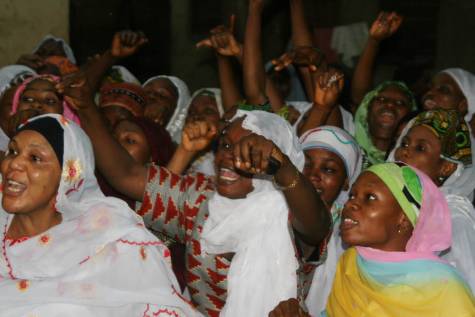 Some of Masaba’s wives protest in front of a court room during his arrest in 2008. Photo credit: Sahara Reporters

While charges were eventually dropped for lack of evidence of wrongdoing, he was given an ultimatum by a local chief and his emirate council to divorce 82 out of the 86 wives within 48 hours or risk forceful eviction from his home.

Masaba, however, called their bluff, refusing to divorce any of his wives and continuing to live in his house with his family until his death on Saturday.

It is believed that in the years after his trouble with the authorities, Masaba actually took on more wives. Locals say their number rose from 86 to 130 wives at the time of his death, with a number of them allegedly pregnant. Estimates also say he fathered between 170 to 203 children.

In a 2008 interview, Masaba, who is also a healer, told the BBC that he met most of his wives when they sought help for various illnesses, which he claims he helped cure.

“I don’t go looking for them, they come to me. I will consider the fact that God has asked me to do it, and I will just marry them,” he said.

On Sunday, Masaba’s funeral was reportedly attended by a large crowd of mourners.