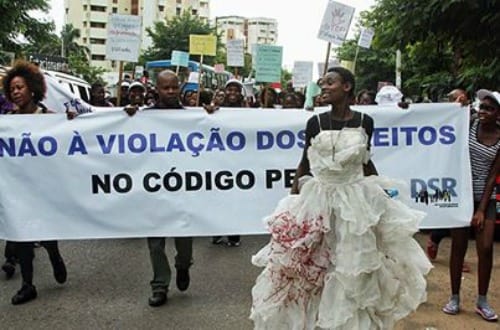 Here, a marriage-rape protestor is seen wearing a wedding dress with blood splattered on it.

There has been a growing feminism movement around Africa. Last week, more than 1,000 angry supporters of women’s rights marched in Mozambique to protest provisional codes that severely affect the constitutional and human rights of young women and children.

RELATED: On the Contrary, Feminism Is African

In Africa, women have been disproportionally misrepresented in parliament; however, “Mozambique ranks 14 among 145 countries in terms of the number of women in Parliament. Of the 250 members of Parliament, 98 are women (40 percent).” 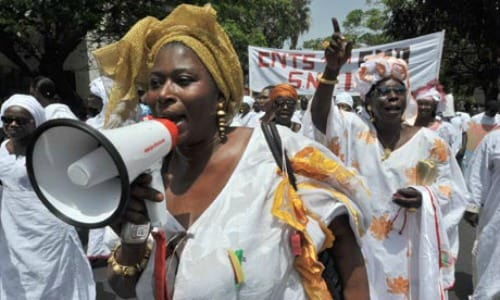 The believe that positive change is enforced through legitimate channels, such as through the Mozambican judicial system, was not the case last week when parliament speaker Veronica Macamo took a step backward and voted to approve unjust code laws that will further victimize women and children of sex crimes.

Here are a few of the barbaric codes in Mozambique:

• Article 24 – If a criminal’s relatives shelter or help the criminal escape or tamper with or conceal evidence of a crime, from rape to murder, it will not be considered a criminal offense.

Tragically, these codes attack poor women and children, robbing them of their dignity and further allowing rapists and offenders to escape unpunished.

In addition, according to Catholic Online, it was also ruled last week that if a rapist decides to marry his victim and stays married for at least five years, all charges will be dropped against him.

For those who support the law, protecting family honor — and avoiding the shame associated with the lose of virginity before marriage — was the chief reason why they supported the law.

But more than 300 women reportedly did not support said law. In fact, protesters held placards that read, “Marry the rapist? No!”