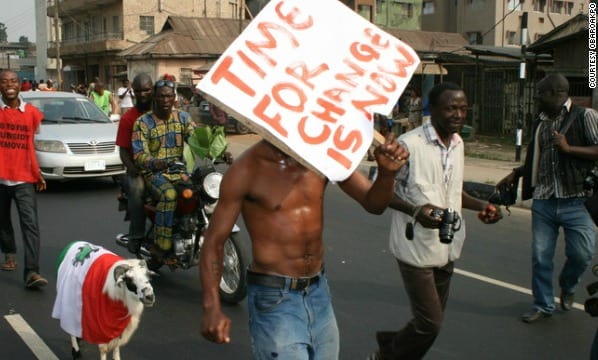 American President Theodore Roosevelt once said, “The credit belongs to those who are in the arena, who strive fearlessly and who, at worst, if they fail, fail while daring greatly.” I’m asking Nigerians, especially in the United States, to stop complaining about the mundane litany of corruption, economic woes, and inept government. Go home, govern the people, and contribute your humble quota to the change eminent in the landscape. Here, I will address three poignant reasons why the Nigerians in the United States must go home: (1) There is an oversupply of highly skilled and educated Nigerian’s in the United States. (2) Nigeria’s economy is emerging. (3) There needs to be moral courage to combat patronage and the pursuit of upward mobility in Nigeria.

Historically, Nigerians are synonymous with high-academic achievement in the United States. The 2006 census reflects this reality: More than 37 percent of Nigerians had Bachelor’s Degrees, 17 percent held Master’s or professional degrees, and more than 4 percent had doctorates.

On the same token, census data revealed that only 19 percent of White Americans had Bachelor’s Degrees, 8 percent held Master’s degrees, and only 1 percent held doctorates.

Surprised? Let’s back up.

Despite remarkable education attainment, discrimination still stifles employment opportunities for Nigerians in the United States. An Economic Policy Institute study reveals that across nationalities and ethnic groups, Black immigrants carried the highest unemployment rate of all foreign-born workers and Nigerians aren’t exclusive to this statistic.

Evidence from this study is compelling.

Thus, I’m urging Nigerians in the diaspora to return home and reap the benefits of its rising economy.

Nigeria’s political woes are news for the mainstream media, but its success gets no airtime. Let’s crunch the numbers: For the past decade, despite political turmoil, the country’s Gross Domestic Product (GDP) has grown on an average of 7 percent compared to less than 3 percent in the United States and many European countries.

Nigeria is the biggest recipient of Foreign Direct Investment (FDI) in Africa. In April 2014, new GDP data made Nigeria the largest economy in Africa and the 26th largest economy in the world. It also houses thriving startups like Jumia, Africa’s Amazon, Konga a seamless e-commerce marketplace, and Dangote’s Cements owned by Aliko Dangote, Africa’s richest man.

If these businesses are thriving, I see no reason why the diaspora can’t be a major player.

How can I be a major player when patronage appears to be the common denominator?

I’ve got good news and a short history lesson. Patronage was also an integral part of American politics. Those with the right political connect obtained most government jobs. It took the United States 128 years after its independence to enact the Pendleton Act (22 Stat. 403), when patronage eventually gave way to merit-based employment.

Nigeria is only 54 years old.

If Nigerians abroad go back to Nigeria with a wealth of experience, knowledge, and boundless enthusiasm, maybe eradicating patronage in the eyes of the law would only take a fraction of what it took the United States. Of course, this is no easy task, but with hard work and perseverance we can implement similar polices.

Let me be clear, I am not oblivious to the socioeconomic and political woes that plague the country: Nigeria still suffers from staggering inequality, most of the population lives on less than $1 a day, and unemployment is ridiculously high at 25 percent. Oil thefts is costing the country more than $20 million daily, paralytic power supply is stifling growth, and extremist rebellion have claimed the lives of more than 1,200 people.

Still, I firmly believe that what is not quite the best may still become the best only if we strive to make it the best. So whether or not we can win in this important fight, get caught trying ­or be found trying.

My fellow Nigerians, never be with the cold and timid that knows neither victory nor defeat. Engage in the political process, start a business in Nigeria, write blogs, and stand up for what you believe in. I understand it’s not easy, but I’m urging you to have moral courage.

The time has come for you to go home, speak truth to power, get out of your comfort zone, and strive for a greater Nigeria.

SEE ALSO: As a Black American, Trip to Lesotho Enriched My Life