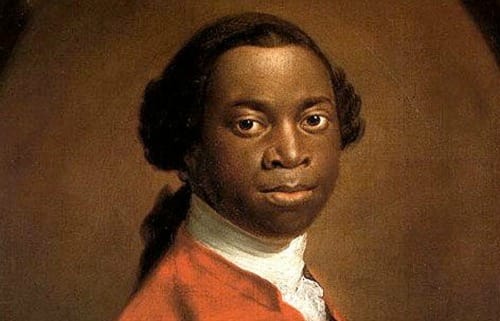 Writer, abolitionist, and former slave Olaudah Equiano (pictured) was responsible for writing one of the earliest accounts of the intercontinental slave trade and became a highly visible proponent of the British slavery abolitionist movement. On this day in 1797, Equiano died in London a full decade before slavery would officially be abolished via the Slave Trade Act of 1807.

Equiano’s exact birth date is not known, but most historians agree that he was born approximately around 1745 in the Benin Empire of pre-colonial Africa, which is now known as Nigeria. Historians have had some dispute regarding Equiano’s actual birthplace, but it has been agreed that he was part of the Igbo people. Equiano details his early life in his biography, “The Interesting Narrative of the Life of Olaudah Equiano, Or Gustavus Vassa, The African.”

Read an excerpt of “The Interesting Narrative” here:

As a boy, according to Equiano’s account, he was kidnapped by slavers at 11 years of age. Accustomed to the life and tradition of slaves and servants in his culture, Equiano served many masters before encountering a slave ship helmed by White men.

Equiano’s journey, like other slaves of the time, would cost he and his fellow people a far greater cost than anyone could ever have imagined.

The Middle Passage and its horrific toll on the slaves was told in grand detail in Equiano’s book:

The first object which saluted my eyes when I arrived on the coast was
the sea, and a slave ship, which was then riding at anchor, and
waiting for its cargo. These filled me with astonishment, which was
soon converted into terror when I was carried on board. I was
immediately handled and tossed up to see if I were sound by some of
the crew; and I was now persuaded that I had gotten into a world of
bad spirits, and that they were going to kill me.

Their complexions too differing so much from ours, their long hair, and the language
they spoke, (which was very different from any I had ever heard)
united to confirm me in this belief. Indeed such were the horrors of
my views and fears at the moment, that, if ten thousand worlds had
been my own, I would have freely parted with them all to have
exchanged my condition with that of the meanest slave in my own
country.

When I looked round the ship too and saw a large furnace or
copper boiling, and a multitude of black people of every description
chained together, every one of their countenances expressing dejection
and sorrow, I no longer doubted of my fate; and, quite overpowered
with horror and anguish, I fell motionless on the deck and fainted.

After arriving in Barbados, many slaves were sold off with no one purchasing the young Equiano. He was then sent to the English colony of Virginia, where he was purchased by a Royal Navy lieutenant Michael Henry Pascal, who renamed Equiano Gustavus Vassa and taught him to become a seaman.

For seven years Equiano worked under Pascal, but wrote that the Virginia masters were cruel and nearly broke him. Pascal then sold Equiano to a Quaker residing in the island nation of Montserrat.

The Quaker taught Equiano how to read and write, even teaching him his trade. The Quaker merchant said that Equiano could buy his freedom in 1765 for 40 pounds, which is exactly what Equiano eventually would do in 1766. Equiano’s fate was not sealed, however, as he ran the risk of becoming kidnapped once again. After escaping near capture by proving he was free, he then headed to England to further educate himself and worked as a trade merchant.

In 1773, Equiano was reportedly part of an expedition to locate the Northwest Passage, a supposed route to the Pacific Ocean via travel through the Arctic.

Equiano was a vocal opponent of slavery, adopting the once-widely-held stance of Quakers who saw the act as an affront to humanity. Encouraged by Quakers to tell his story by way of the financial and social investment, Equiano would eventually publish his book in 1789, and it made him a prominent pioneer of the abolitionist movement.

Equiano’s book inspired other similar narratives from former slaves. Equiano was also a vaunted figure of the poor Black community in London and served to assist African and Asian immigrants in the country.

Equiano married a British woman, Susannah Cullen, in 1792, but she died in 1796 and he followed her in death just over year later. One of their two daughters would also die at a young age, leaving their remaining daughter to inherit his considerable savings.

SEE ALSO: President Of Guinea Ahmed Sékou Touré Died On This Day In 1984