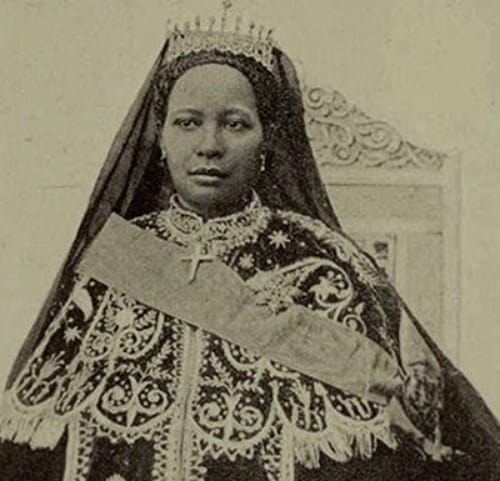 Empress of Ethiopia Zawditu I (pictured) was the first woman to lead an internationally recognized state in Africa in modern times. There are various accounts of Empress Zawditu’s life — many of which contrast between historical scholars, but what is universally agreed upon, though, is that Empress Zawditu named Ras Tafari king, and he later became known as Haile Selassie.

Empress Zawditu was born April 29, 1876, to Negus (King) Menelik II of Shewa and Emperor of Ethiopia and Woizero (Noblewoman) Abechi. Although Negus Menelik had other children, he was said to be close to Zawditu. After losing his infant son, Negus Menelik was without a natural male heir to the throne. In conflict with Emperor Yohannes IV, Negus Menelik married off his 10-year-old daughter to the emperor’s son, Ras Araya Selassie Yohannes, in 1886.

But Emperor Menelik died in 1913, thus giving way to Lij Iyasu, the son of Zewditu’s half-sister Shewa Regga, to assume the throne. However, Iyasu was never officially crowned, even though he was seen as the heir apparent.

Iyasu exiled Zawditu and her husband — fearful that he would lose the throne to her.

Emperor Menelik’s death was hidden from the public, and because of Iyasu’s youth and lack of training, he was largely disliked. Political maneuvering from the Ethiopian Orthodox Tewahedo Church and the Council Of State stalled the announcement of Emperor Menelik’s passing, naming Zawditu to rule on September 27, 1916.

Zawditu was known as the “Queen of Kings.”

Zawditu’s rule was mostly symbolic, because her regent Ras Tafari Makonnen handled the state’s affairs. Ras Tafari  was also named heir apparent as none of Empress Zawditu’s children survived to assume the role. There was an attempt to remove Ras Tafari from his regent post that was not successful, thus Empress Zawditu named Ras Tafari as Negus and he effectively became the ruler of Ethiopia at this point.

Iyasu staged a coup to regain the throne with the help of his father, Negus Mikael of Wollo. Empress Zawditu’s forces defeated Negus Mikael at the Battle of Segale, and Iyasu left the region. Iyasu was captured and jailed, with Empress Zawditu begging for mercy on the vanquished would-be leader.

Ras Tafari and Empress Zawditu clashed on how to lead Ethiopia in the boom of the 20th century. The empress believed in keeping Ethiopian tradition and the church at the forefront, while Ras Tafari believed that the country should open its borders to the world. Technology was expanding at a rapid rate, and Ras Tafari thought the country should embrace changes.

Empress Zawditu only ruled in name, and there were several attempts to unseat Ras Tafari from power. The empress’ husband Ras Gugsa Welle led an armed rebellion against Ras Tafari, but was killed at the Battle of Anchem on March 31, 1930.

Two days later, Empress Zawditu died under mysterious and conflicting circumstances. Researchers say that the empress suffered from diabetes and other ailments. Others say she died from shock after submerging her body in extremely cold holy water. There are some who speculate that Ras Tafari had the empress poisoned, but nothing has ever been confirmed.

Ras Tafari rose from Negus to emperor and later took on the name Haile Selassie.