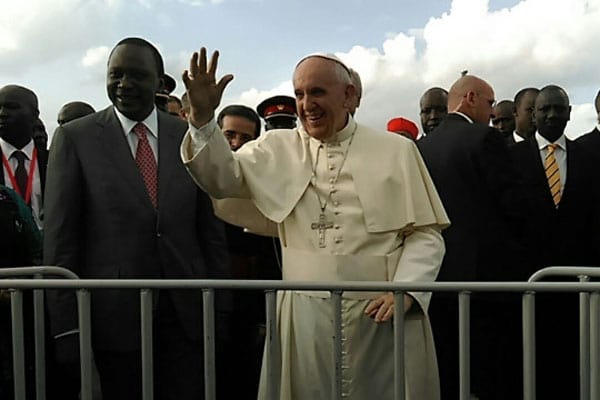 Pope Francis’ trip to Africa is his first as pontiff, with Uganda and the Central African Republic serving as his subsequent destinations after Kenya.

Of his travels, Pope Francis told the Associated Press, “I go with joy to meet Kenyans, Ugandans, and our brothers in Central Africa.”

During Pope Francis’ visit to Kenya, he will meet with Kenyan President Uhuru Kenyatta Wednesday, attend an inter-faith meeting on Thursday, and hold mass at the University of Nairobi, where more than 1 million people are anticipated to attend.

Pope Francis will also visit a shantytown to connect and “console” the poor.

Of Pope Francis’ decision to meet with the poor, Supreme Council of Kenya Muslims Vice Chairman Abdalla Kwamana said, “It is often said that Kenya is owned by the rich and powerful. The people in the slums are never recognised.

“When he goes to see them and console them, they’ll feel they are people of substance.”

One in six of the world’s Catholics are in Africa.