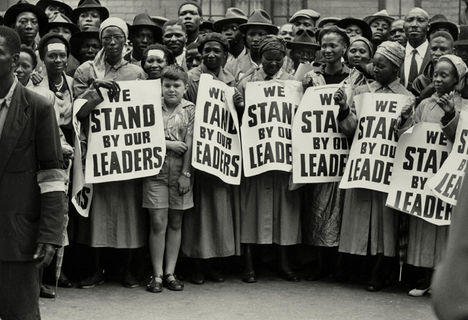 NEW YORK, Aug. 14, 2012 /PRNewswire/ — On view from September 14, 2012 – January 6, 2013 at the International Center of Photography (1133 Avenue of the Americas at 43rd Street), Rise and Fall of Apartheid: Photography and the Bureaucracy of Everyday Life offers an unprecedented and comprehensive historical overview of the pictorial response to apartheid that has never been undertaken by any other museum. Through its images, this exhibition explores the significance of the 50-year civil rights struggle, from how apartheid defined and marked South Africa's identity from 1948 to 1994, to the rise of Nelson Mandela, and finally its lasting impact on society.

Curated by Okwui Enwezor with Rory Bester and based on more than six years of research, the exhibition examines the aesthetic power of the documentary form – from the photo essay to reportage, social documentary to photojournalism and art – in recording, analyzing, articulating, and confronting the legacy of apartheid and its effect on everyday life in South Africa.

Apartheid, the compound Dutch word meaning separate (apart) and neighborhood (heid), was the political platform of Afrikaner nationalism before and after World War II. It created a political system designed specifically to promote racial segregation and enshrine white domination. In 1948, after the surprise victory of the Afrikaner National Party, apartheid was introduced as official state policy and organized across a widespread series of legislative programs.

Over time, the system of apartheid grew increasingly ruthless and violent towards Africans and other non-white communities. It not only transformed the modern political meaning of citizenship, it invented a wholly new society in both fact and law. The result was a reorganization of civic, economic, and political structures that penetrated even the most mundane aspects of social existence – from housing, public amenities, and transportation, to education, tourism, religion, and businesses. Apartheid transformed institutions, maintaining them for the sole purpose of denying and depriving Africans, Coloureds, and Asians of their basic civil rights.

A central premise of this exhibition is that South African photography, as we know it today, was essentially invented in 1948. The exhibition argues that the rise of the Afrikaner National Party to political power and its introduction of apartheid as the legal foundation of governance changed the pictorial perception of the country from a purely colonial space based on racial segregation to a highly contested space based on the ideals of equality, democracy, and civil rights. Photography was almost instantaneously alert to this change and in turn transformed its own visual language from a purely anthropological tool to a social instrument. Because of this, no one else photographed South Africa and the struggle against apartheid better, more critically and incisively, with deep pictorial complexity, and penetrating insight than South African photographers. It is the goal if this exhibition to explore and pay tribute to their exceptional photographic achievement.

Encompassing the entire museum, including the exterior windows at ICP, this landmark exhibition includes the work of nearly 70 photographers, artists, and filmmakers. Complex, vivid, evocative and dramatic, Rise and Fall of Apartheid covers more than 60 years of powerful photographic and visual production that form part of the historical record of modern South African identity. Accompanied by more than 500 photographs, artworks, films, videos, documents, posters, and periodicals, the exhibition brings together a rich tapestry of material, many of which have been rarely shown together, to examine and document one of the most absorbing historical eras of the 20th century.

From the work of members Drum Magazine in the 1950s to the Afrapix Collective in the 1980s to the reportage of the so-called Bang Bang Club, included in the exhibition are the exceptional works of pioneering South African photographers including Leon Levson, Eli Weinberg, David Goldblatt, Peter Magubane, Alf Khumalo, Jurgen Schadeberg, Sam Nzima, Ernest Cole, George Hallet, Omar Badsha, Gideon Mendel, Paul Weinberg, Kevin Carter, Joao Silva, and Greg Marin, and the responses of contemporary artists such as Adrian Piper, Sue Williamson, Jo Ractliffe, Jane Alexander, Santu Mofokeng, Guy Tillim, Hans Haacke, and William Kentridge. In addition, the exhibition will feature the works of a new generation of South African photographers such as Sabelo Mlangeni and Thabiso Sekgale, who explore the impact of apartheid as it continues to resonate today.

The exhibition will be accompanied by a fully illustrated catalogue, edited by Okwui Enwezor and Rory Bester, with essays by Enwezor and Bester, and other prominent scholars in the field, including Darren Newbury, Achille Mbembe, Patricia Hayes, Collin Richards, Khwezi Gule, and Michael Godby.

Rise and Fall of Apartheid: Photography and the Bureaucracy of Everyday Life is made possible with support from Mark McCain and Caro Macdonald/Eye and I, The Andy Warhol Foundation for the Visual Arts, the National Endowment for the Arts, Joseph and Joan Cullman Foundation for the Arts, Deborah Jerome and Peter Guggenheimer, the New York City Department of Cultural Affairs in partnership with the City Council, and from the Robert Mapplethorpe Foundation in honor of 30 years of committed ICP service by Willis E. Hartshorn.

Okwui Enwezor is Director of Haus der Kunst, Munich. Before joining Haus der Kunst, Enwezor was Adjunct Curator at ICP and Dean of Academic Affairs and Senior Vice President at San Francisco Art Institute. Most recently he was the Artistic Director of La Triennale 2012 at Palais de Tokyo, Paris, and has served as the Artistic Director of 2nd Johannesburg Biennale (1997), Documenta 11 (2002), and 7th Gwangju Biennale (2008) amongst many other international exhibitions. Enwezor served as the Kirk Varnedoe Visiting Professor at Institute of Fine Arts, New York University. He is the founding publisher and editor of Nka: Journal of Contemporary African Art.

Rory Bester is an art historian and critic, as well as an occasional curator and documentary filmmaker. Based at the Wits School of Arts in Johannesburg, his teaching and research areas include archive and museum practice, curatorial studies, exhibition histories, migration and diaspora studies, photographic histories, postcolonialism, and post-war South African art. He regularly writes art criticism for the Mail and Guardian newspaper, as well as for Art South Africa , Camera Austria and Nka: Journal of Contemporary African Art. Bester has curated and co-curated a number of exhibitions in Denmark, Germany, South Africa, Sweden and the United States.

The International Center of Photography (ICP) was founded in 1974 by Cornell Capa (1918-2008) as an institution dedicated to photography that occupies a vital and central place in contemporary culture as it reflects and influences social change. Through our museum, school and community programs, we embrace photography's ability to open new opportunities for personal and aesthetic expression, transform popular culture, and continually evolve to incorporate new technologies. ICP has presented more than 500 exhibitions, bringing the work of more than 3,000 photographers and other artists to the public in one-person and group exhibitions and provided thousands of classes and workshops that have enriched tens of thousands of students. Visit www.icp.org for more information.