Tanzania’s Union Day celebrations slated for today, April 26, won’t take place after President John Pombe Magufuli directed that the money set aside for the 52nd Union Day anniversary be spent on a road project instead.

The newly elected President cancelled the much-anticipated Union Day celebrations earlier this month, saying the $1 million will be used to expand the road from Mwanza Airport to Mwanza town.

“The money was embarked to buy food, drinks as well as paying allowances to those who will be involved in the celebrations including parades and mass plays,” President Magufuli said in a statement.

However, the statement sought to clarify that April 26 will be a public holiday as has been the norm, but without the usual public assembly and festivities.

Tanzania’s Union Day, which is celebrated on April 26, marks the day Tanganyika and Zanzibar united to form the United Republic of Tanzania in 1964.

This is the third cancellation of a major public holiday in Tanzania after President Magufuli cancelled the Independence Day on December 9 last year, just days after he was sworn in as President.

He directed that the 4 billion shillings set aside for Independence Day celebrations should rather be used to rehabilitate the 4-kilometer Ali Hassan Mwinyi road from Morocco junction to Mwenge, Dar es Salaam.

The President insisted that the expansion of this road would ease traffic in Tanzania’s capital city. 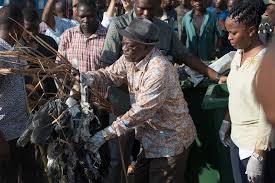 Magufuli then led Tanzanians in cleaning their surroundings as a way of marking the December 9 Independence Day.

Dr. Magufuli also called off the celebrations of World AIDS Day in what he termed as an effort to scale down unnecessary government expenditure. He then ordered the money reserved for the day’s celebrations to be spent on buying drugs for HIV patients in the country.

It is estimated that Tanzania has the biggest number of public holidays in both the Eastern and Southern Africa regions.

As President John Pombe Magufuli ascended to power, he promised that it will no longer be business as usual in Tanzania.