The history of slavery in the Americas has always been marred by its deep racial past.

So much so that stories like those of Anthony Johnson, a black man who was the first person to legally own a slave in the U.S. is little known or studied.

But Johnson’s story changed the course of American history.

According to historians Charles Johnson and Patricia Smith, in 1622, an enslaved African named Anthonio appeared in the historical record. It is believed that Johnson arrived in Virginia in 1621, captured in Angola and put on the ship, James. Early records listed him as “Antonio, a Negro” servant, because Virginia had no rules for slaves at the time.

Johnson and Smith explain the Virginia system of the time:

“Both African slaves and European indentured servants labored in Virginia in the 1620s. Indentured servants agreed to work for a planter for a specific period of time in exchange for their passage to the New World, and then they usually became free. Slaves were forced to come to North America, but in the seventeenth century they were also often able to earn their freedom. Both indentured servants and slaves often labored in Virginia tobacco fields side by side and were subject to the same treatment, often cruel, by planters for whom they worked.”

Historians at Wesleyan University note further on the times, 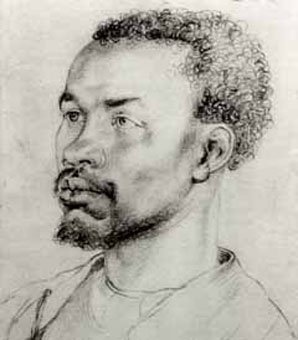 Blackpast.org note that “Antonio the Negro” worked on the tobacco plantation of Edward Bennett near Warresquioake, Virginia. He married “Mary a Negro woman” who had sailed to the New World aboard the Margrett and John. In March of 1622, local Tidewater Indians attacked the plantation leaving Johnson, one of only five survivors, on the plantation and fifty-two people killed.

Sometime between 1622 and 1641, “Antonio the Negro” became landowner Anthony Johnson. It is not known how or when the Johnsons became free or owned land but a man identified as “Anthony the Negro” stated in court records, “Now I know myne owne ground and I will work when I please and play when I please” in 1645.

The Johnsons are believed to have owned 250 acres of land along the Pungoteague Creek on the eastern shore of Virginia by 1650. They acquired the land through the headright system, which allowed planters to claim acreage for each servant brought to the colony, Anthony claimed five headrights, one in the name of his son, Richard Johnson, and the rest believed to have been men he imported.

Court records in 1641 also indicate that Anthony was master to a black servant, John Casor. Casor would become the first person to be ‘arbitrarily declared‘ a slave for life in the U.S. in a 1655 court case. Anthony’s neighbor and white planter, Robert Parker, had momentarily secured Casor’s freedom after he had convinced Parker and his brother George that he was an illegally detained indentured servant.

The Smithsonian Magazine, writing on The Horrible Fate of John Casor, The First Black Man to be Declared Slave for Life in America say:

“That’s what happened to the holder of Casor’s indenture, Anthony Johnson. Johnson served out his contract and went on to run his own tobacco farm and hold his own indentured servants, among them Casor. At this time, the colony of Virginia had very few black people in it: Johnson was one of the original 20.

After a disagreement about whether or not Casor’s contract was lapsed, a court ruled in favor of Johnson and Casor saw the status of his indenture turn into slavery, where he—not his contract—was considered property. Casor claimed that he had served his indenture of “seaven or Eight years” and seven more years on top of that. The court sided with Johnson, who claimed that Casor was his slave for life.”

Johnson’s court demand to keep Casor for life would change the course of American history. According to historians at Wesleyan University,

About seven years later, Virginia made this practice legal for everyone, in 1661, by making it state law for any free white, black or Indian to be able to own slaves, along with indentured servants. The step from there to a racialized idea of slavery wasn’t a huge one.

Johnson died in 1670. In August of the same year, an all-white jury ruled that “Anthony’s original land in Virginia could be seized [from his surviving family] by the state “because he was a Negroe and by consequence an alien.”

Fifty acres that Anthony had given to his son, Richard, ended up in the hands of his white neighbor, George Parker.

Unfortunately, there is no other information about the whereabouts or later history of the Johnsons.  Historians say that by 1730, the Johnson family had vanished from the historical records.