The death of Prince Imperial Napoleon Eugene Bonaparte, the great-grandson of French emperor and conqueror, Napoleon Bonaparte, and the only son of Napoleon III sent shock waves throughout Britain and France in 1879. The Prince’s death ignited even more emotion in Britain and France than the disaster of Isandlawana, where 858 white men and 471 Black soldiers who had been enlisted to fight for the British, were killed by the Zulus.

Why? When Prince Napoleon’s father died in January 1873, he was proclaimed by the Bonapartists in France as Napoleon IV, Emperor of the French.  He was the last serious hope of the dynasty for the restoration of the House of Bonaparte to the throne of France.

In effect, the Zulus ended the Bonaparte legacy but very few people know this history.

Prince Napoleon Bonaparte was the only child of Emperor Napoleon III and his Empress consort, Eugénie de Montijo. After his father was dethroned in 1870, he relocated with his family to England, where his father soon died.

In England, he trained as a soldier, in which he was especially apt. The Bonapartists in France tried to convince him to come home to his party and to reestablish the throne after he was done with his military training, but he felt indebted to the British and was ready to be on the front lines.

He wrote the following in his last will and testament, “I shall die with a sentiment of profound gratitude to Her Majesty the Queen of England and all the Royal Family, and for the country where I have received for eight years such cordial hospitality.”

Finally, despite his mother’s objections, he successfully petitioned Queen Victoria and Duke of Cambridge, Commander-in-Chief of the British army, to go to South Africa in 1879. He arrived in Cape Town on 26 March 1879 as a “special observer” of the Anglo-Zulu War. 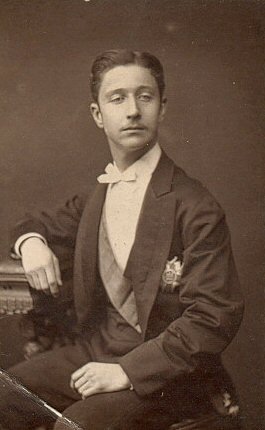 Prince Napoleon was full of enthusiasm when he arrived in South Africa. He was warned by Lieutenant Arthur Brigge, a close friend, “…to avoid running unnecessary risks. I reminded him of the Empress at home and his political party in France.” Leaders of the British army tried to keep him active but safe, but the young prince had a concerning tendency to pursue Zulu warriors whom he spotted in the bush.

Two months after his arrival, upon confusion and misdirection during orders and counter orders, the prince assumed command of a small patrol of five soldiers with whom he set out to seek a good site for the army’s camp that evening and to collect cartographic information. The prince decided to halt at an abandoned camp to brew coffee and take a rest and this is where he met his demise.

A large number of Zulus were quite close and discovered his patrol, attacking them around 3:15 p.m. Two soldiers were killed and according to a soldier who was the last to see the Prince, the Prince was unable to remount his horse during the attack and decided to flee on feet, pursued by several Zulu warriors.

Historians say, “the prince had no chance of escaping these men of Olympic stature who could cover dozens of kilometers per day in the bush”. The Zulus were known to be especially skilled warriors.

The surgeon-major who conducted the Prince’s autopsy found that his body had been pierced by 18 spear wounds. All of his wounds were inflicted on the front of the body.

The Prince’s body was sent to England where a state burial was held for him by the Queen.

Despite and perhaps because of this royal defeat, the British amassed even more machinery and firearms. On July 3, they faced more than 20,000 Zulu warriors at Ulundi, and fought them at close range, killing more than 1,500 Zulumen. Zululand became an official British colony in 1897, joining the union of South Africa in 1907.