In this edition of our Technology and Innovation Tuesday (#TIT) series, we take a look at Kenya’s deployment of its first satellite into space.

Kenya will launch its first locally produced satellite into orbit on May 11, 2018, making the East African country the fifth in sub-Saharan Africa to have a satellite in space.

The 10-centimetre CubeSat named the First Kenya University Nano-Satellite – Precursor Flight (1KUNS-PF) was developed by students and researchers of the University of Nairobi in partnership with Japanese Space Agency (JAXA) under the KiboCube programme run by the United Nations Office for Outer Space Affairs (UNOOSA). 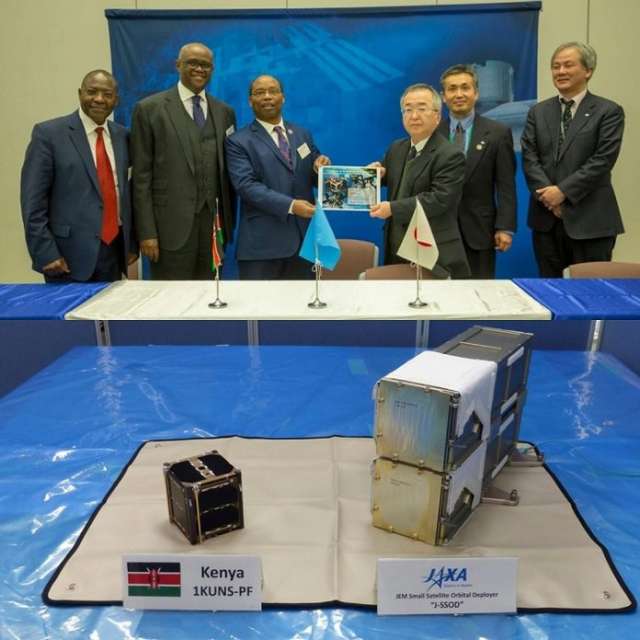 Kenyan and Japanese authorities during the handing over of the satellite for deployment.

The nano-satellite was handed over to the JAXA Tsukuba Space Center in January and it will be deployed on Friday from the Kibo Space Centre, Japan’s own International Space Station (ISS) which is in the experimental stage.

This is the first CubeSat to be deployed from the Kibo Space Centre and it will be done in the presence of a delegation of government officials and university researchers led by Education Cabinet Secretary Amina Mohamed, the University stated.

As of 2018, only nine countries and one inter-governmental organisation in the world have sent objects including satellites into orbit with their own launch vehicles. They include the European Space Agency, Russia, China and the United States.

No African country has launched satellites into space using its own launch vehicles. However, only four countries in Sub-Saharan Africa have satellites orbiting the earth. Three African satellites were launched into orbit in 2017 alone.

Here are the four other sub-Saharan African countries with satellites in space.