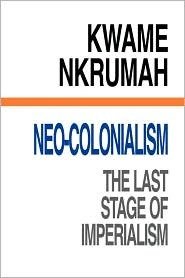 Neo-Colonialism, The Last Stage of Imperialism by Kwame Nkrumah

Kwame Nkrumah, Ghana’s first president, freedom fighter, and pioneer of Pan Africanism released this book in 1965. According to reports, it was so controversial that the US Department of State blocked $25 million in foreign aide to Ghana upon its release. The book was among the first to openly criticize Western governments, especially the United States, who had wanted to paint themselves as impartial at worst, and supportive of African countries at best at the end of colonialism. The book pointed out the exploitative nature of these countries’ relationship with Africa, especially in economic terms. “Something in the nature of an economic revolution is required. Our development has been held back for too long by the colonial-type economy. We need to reorganize entirely so that each country can specialize in producing the goods and crops for which it is best suited,” Nkrumah wrote.