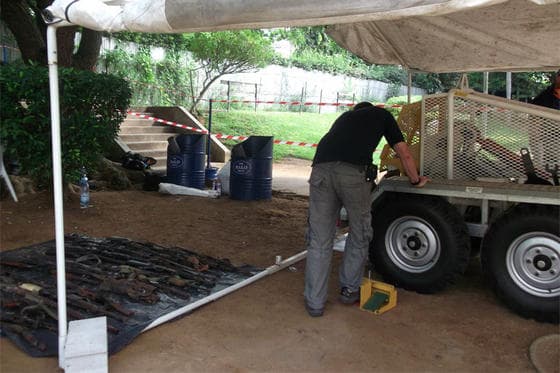 The United Nations Mine Action Service (UNMAS) has wiped out over 600 small arms and light weapons in the Ivory Coast over the last two days. It was part of the first weapon destruction exercise in the area since the post-election crisis in 2011.

The weapons were stored at a camp in Abidjan, and UNMAS wasted no time in cutting them up. It was a collaboration effort by UNMAS and the National Commission of Small Arms and Light Weapons of Côte d'Ivoire (COMNAT-CI). It was part of the observance of International Small Arms Destruction Day, which is on July 9.

The weapons were collected during a disarmament, demobilization and reintegration (DDR) of ex-combatants by the UN Operation in Côte d'Ivoire (UNOCI) throughout the country.

Carles Frisby, the UNMAS Programme Manager in Côte d'Ivoire, said, "Having secured the consensus of all stakeholders, including the National Commission on Small Arms and Light Weapons to proceed with destruction, we can now contribute in a concrete manner to the reduction in armed violence.”

COMNAT-CI has performed 36 ad hoc weapon collection operations across the country, recovering 1,811 weapons and 316,600 munitions, according to UNMAS.