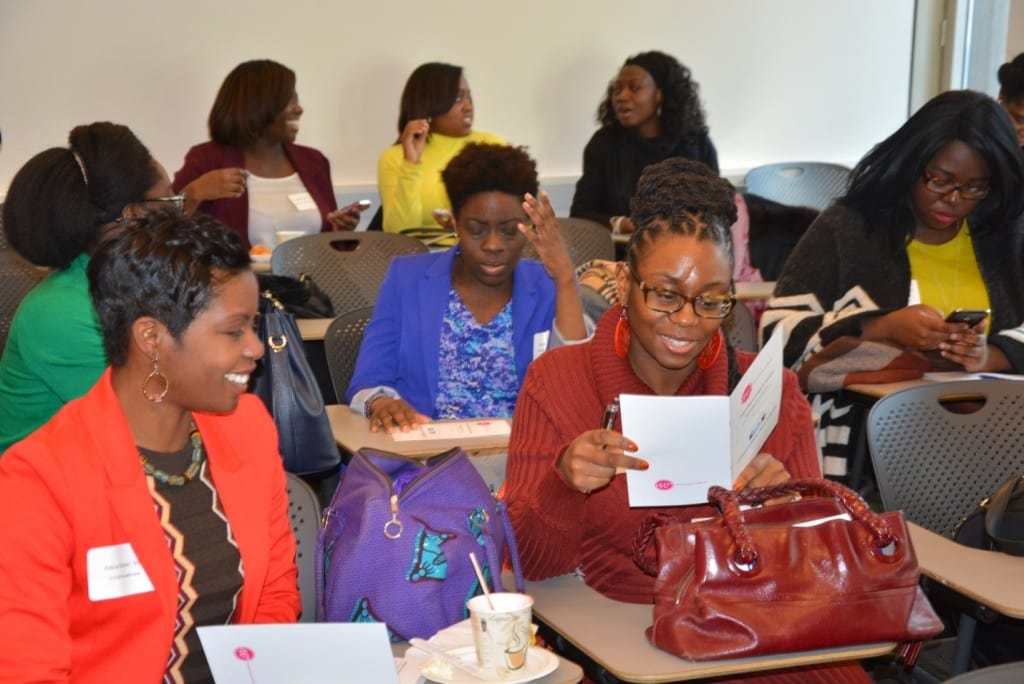 Professionals networking at the WomenWerk Forum

For the second year in a row, WomenWerk sold out its annual Forum and Gala with more than 200 women and girl participants. Guests included young professional men and women, many of whom identify as members of the international community.

WomenWerk is a non-profit women’s empowerment organization founded by Nekpen Osuan and Demi Ajayi. Their New York City-based team hosts an annual Forum and Gala every March in honor of International Women’s Day. Their team has enjoyed watching WomenWerk grow and expand by connecting women and men in engaging conversations about gender equity.

WomenWerk 2015 also brought together various interest groups and served as a unique platform for young professionals to connect. Here are a few of our favorite moments from the event:

The WomenWerk Forum featured dynamic panels, skillshare workshops, and vending. The day began with a networking breakfast connecting youth and young professional women, followed by the youth forum for students and the two panel discussions for young professionals.

The first panel was a panel of women from different media backgrounds, including MaameYaa Boafo actress and star of “An African City”; Zeba Blay, style contributor for the Huffington Post; and Nneka Nwosu, a newscaster for Boston’s local NBC network.

The 2015 WomenWerk Gala was chaired by Mo Abudu, CEO of Ebony Life TV, with attendees of the Gala often using the word “inspirational” to describe the event.  This year’s Gala honorees were:

James’ began her career as a City Council representative in Brooklyn and was outspent by her chief opponent four to one. James also spoke about similarities between the Gender Equality Movement and the Civil Rights Movement revived by the 50th celebration of the March on Selma that same weekend.

WomenWerk describes itself as a platform for meaningful conversations and networking, where women and men connected in engaging conversation. But the event would not have been possible without numerous community partnerships, such as UN Women, the United Nation’s Young Professionals Association, Young African MBAs (YAM), CUNY’s University Student Senate, small business vendors, NYU student groups, various media platforms, African meet-ups, and more.

The WomenWerk Forum and Gala brought together outstanding speakers from different sectors who opened up about their journey to success. Cathy Wasserman, life and career coach, discussed how she used inspiration to shape and reshape her brand to become a full-time entrepreneur, while Blay offered insights for using social media to create positive influence.

Boafo also discussed how she was particularly happy to see that “An African City” is celebrated as a progressive plot among international communities.

WomenWerk’s 2015 Ally of the Year Briggs shared a touching account of his time covering the damaging impact of war across the world, which inspired him to start his non-profit The ManUp Campaign, which engages men in conversations on gender equity.

For more information on WomenWerk and their annual Forum and Gala, visit WomenWerk.com. To join the WomenWerk 2016 planning committee, e-mail WomenWerk@gmail.com.