Less than two weeks after the goalkeeper of the Gambian women’s football team drowned while trying to illegally cross the Mediterranean Sea to Europe, Ali Mbengu, a popular Gambian wrestler, has died under similar circumstances, reports the BBC.

Known to his fans as “Mille Franc,” Mbengu died Friday, after the boat he was travelling in from Libya to Italy capsized in the middle of the Mediterranean Sea, according to his coach Pateh Nying.

“I couldn’t believe that a young man would end up like this – he is a great loss to me and the group,” Nying told AFP.

Under Nying, Mbengu made his debut at Club Serrekunda Gome Saboppa in 2012.

The 22-year-old wrestler was one of the most promising and highly disciplined wrestlers in the Gambia, Matarr Saine, the spokesman of the Gambian Wrestling Federation, says.

On his trip last week, Mbengu reportedly traveled to Libya with four of his friends in the same boat. Only one of them survived.

Saine says the desperate journey to Europe through the Mediterranean Sea has claimed the lives of many promising Gambian sportsmen and women, adding that the whole wrestling community in the country is mourning.

“We are discouraging young people, especially wrestlers, from embarking on this risky journey,” Saine told the AFP. 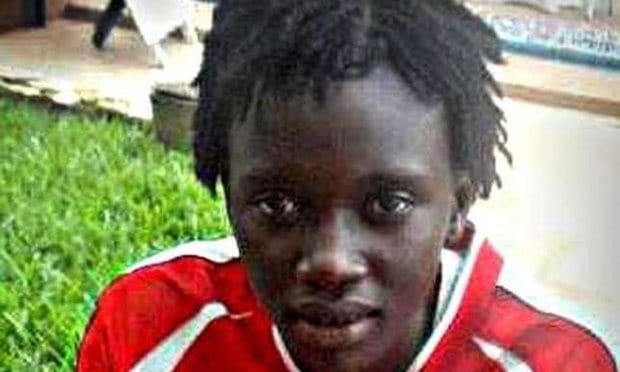 Last month, the whole country was shocked by the sudden death of their celebrated national women football team’s goalkeeper Fatim Jawara (pictured) who drowned in the Mediterranean Sea trying to reach Italy.

Jawara is remembered for saving a penalty kick in a friendly match between the national soccer team and the Glasgow Girls from Scotland.

Studies show that many of the undocumented African migrants arriving in Italy are Gambians.

Most of these migrants are embarking on the deadly journey to Europe in search of greener pastures, while others are running away from the persecution of President Yahya Jammeh’s government.

Jammeh, 51, has been the president of the Gambia for 20 years, with human rights organizations constantly accusing him of ruling with an iron fist.

Within the two decades of his reign, Jammeh has survived eight attempted coups from a group calling itself the “Gambian Freedom Fighters.”

Jammeh is also accused of rounding up people from schools and public offices and forcing them to participate in solidarity marches through the capital, Banjul.