A report released by Amnesty International says suspects, including women and children, were beaten, water boarded, and forced in to stress positions, with dozens of detainees dying as a result.

Cameroonian authorities have slammed the report, though, with Information Minister Issa Tchiroma Bakary describing Amnesty International as a “tool of [Boko Haram] propaganda.”

Security forces were “fighting to protect the physical integrity” of Cameroon and there was “no need for our army to kill innocent civilians,” Bakary told the BBC.

The Amnesty report, however, claims Cameroonian authorities detained scores of people for supporting the militants without evidence. 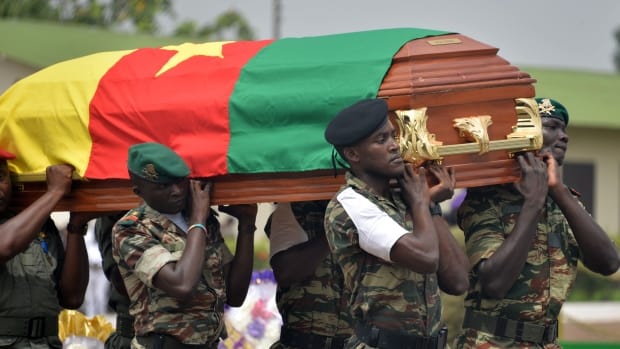 Cameroonian soldiers carry a coffin containing the remains of a fellow soldier during a ceremony for 38 troops who died in the north of the country in March 2015 while fighting Islamist Boko Haram militants. There was more violence reported Jan. 25, when four suicide bombers struck in the region. Photo credit: Reinnier Kaze/AFP/Getty Images

Boko Haram, a Nigerian-based Islamic terrorist group infamous for its brutal acts of terror including abductions, mass murder, slavery, and suicide bombings, has waged a seven-year-old insurgency war mainly in northeast Nigeria and the areas around the Lake Chad basin.

The activities of the insurgents have repeatedly spilled in to a number of neighboring countries bordering Nigeria, including Niger Republic, Chad, and Cameroon, with Amnesty International saying the group is responsible for the death of 1,500 civilians and the abduction of many others in Cameroon since 2014.

Amnesty says its report covers the time periods between 2013 and 2017, with the victims describing at least 24 methods of torture at more than 20 different sites.

In one of the sites, the United States and French military personnel were allegedly present; there is no evidence, though, that the foreign forces were involved. Still, Amnesty called on both countries to investigate the allegations.

In November of last year, three Cameroonian secondary school pupils were each sentenced to 10 years in prison for sharing a joke about Boko Haram.

And this April, a military tribunal sentenced a journalist to 10 years in prison on multiple terrorism charges for his alleged connection and sympathies to the dreaded militant group.