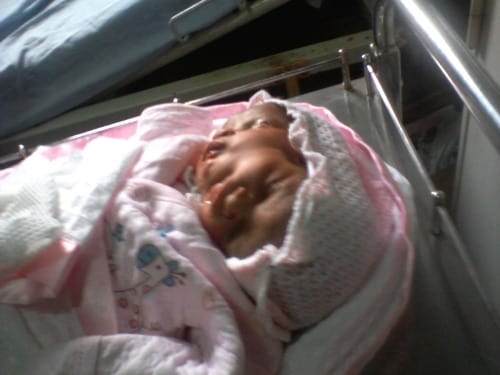 Limbe, Cameroon (Face2Face Africa) A young lady who is residing in the seaside resort town of Limbe, one of the main towns of the South West Region of the West and Central Africa country of the Republic of Cameroon, has recently delivered a baby that has two heads (pictured).

SEE ALSO: Why Africa Should Be Your Next Travel Destination

The Mother, whose name hospital officials are refusing to make public due to fear she will be stigmatized, is reported to have gone in to labor pains for nearly 24 hours. Consequently, she was forced to deliver her child through a Cesarean operation on March 13th at Limbe Regional Hospital.

Afterward, the woman reportedly went into a coma, but once she awoke, doctors prevented her from seeing the baby.

Meanwhile, officials told Face2Face Africa that the woman’s husband, whose first name was only given to the press as Mr. Wilfred, reportedly collapsed once he saw his child with two heads.

According to some medics and Social Affairs experts from the Regional Department of Social Affairs, they are currently counseling Mr. Wilfred so that he can overcome his shock.

Authorities at the hospital are reportedly ruling out the possibility of an operation to separate the babies, saying that they only stand a 1 percent chance of survival because the babies’ organs are not double and separated like in the case of some Siamese twins.

Meanwhile, residents of Limbe and other nearby towns were rushing in to the Limbe Regional Hospital to catch a glimpse of the baby, but security has held its ground to keep order.

Initially, five ecography reports and examinations that were conducted indicated that the Mother was pregnant with twins.

And despite allegations that his wife had been sick and had complications, Mr. Wilfred has said that his wife was healthy throughout the pregnancy.