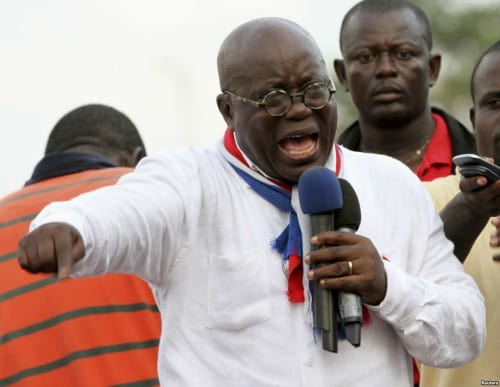 As Nana Akufo-Addo is speculated to make an announcement on Thursday regarding representing the NPP in 2016, the claims that he and NPP officials are corrupt have been largely shut down. In response to the Reform for Youth Empowerment group, former NPP Youth Organizer Anthony Karbo spoke on Accra-based Asempa FM, saying that Nana Akufo-Addo is as “clean as a newborn baby.”

Still, detailed in a report from Vibe Ghana, the group demanded that Nana Akufo-Addo address allegations of corruption within the NDC. The corruption allegations come from NPP Member of Parliament for Assin Central Hon. Kennedy Ohene Agyapong accusing NPP National Chairman Jake Otanka Obetsebi-Lamptey of stealing campaign funds and other monies. Mr. Agyapong has since apologized for his accusations.

Nana Akufo-Addo stepped away from politics after Supreme Court Justice William Atuguba ruled in favor of current President John Dramani Mahama, after the NPP challenged the close numbers of the vote. Nana Akufo-Addo remained in London six months after Justice Atuguba’s ruling but has since returned to Ghana with the people reportedly embracing him warmly.

UPDATE: Confirming all speculation, Nana Akufo-Addo has announced that he will represent the NPP in the 2016 elections. Nana Akufo-Addo’s declaration is his third attempt at the presidecy. He will face off in the upcoming prelimnairy votes against other NPP candidates.