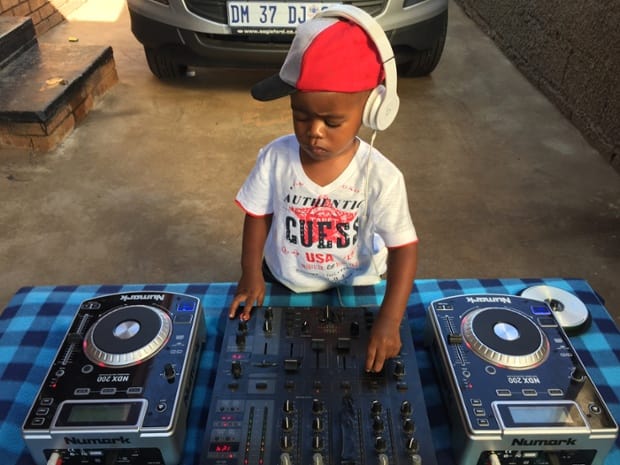 At only 3 years old, Oratilwe Hlongwane (pictured) is making headlines for his thousands of fans.

But what does he do?

Even though he still wears diapers and speaks just a few words, Hlongwane, a.k.a. DJ Arch Junior, deejays for the public alongside South Africa’s popular acts and has already made a number of noteworthy appearances on radio.  In a recent interview, DJ Arch Junior’s dad, Glen, and mother, Refiloe Marumo, explained how the young prodigy got in to deejaying and just how proud they are of him.

According to Glen, DJ Arch Junior surprisingly got in to deejaying just a few short months ago, after watching his father on the boards, “It was some time around last December. I was playing those head songs by Melon; I was actually practicing, but I think he was watching me while I was [practicing], because he just wants to know everything that I do.

“He saw me doing mixing. Then I was tired of it, and I put the iPad down, and I took a break. Then that’s when he stepped in and he started mixing. He started hitting the effects button and everything else, so that’s when we, like, took a video of it and we shared it to friends. And friends shared, and it actually went viral.

“And that’s how DJ Junior was born.”

Watch DJ Arch Junior deejay here in a video that already has more than 400,000 views since being posted by his parents in February:

On how his son’s accomplishments make him feel, Glen says, “It is unbelievable, but now, the more he does it, the more I stand there and look, I’m like, Wow, God is real, because I didn’t teach him how to do this. It is just something he has naturally.”

Marumo adds about her son, “I’m proud of him…that he is already doing good at the age of 3, but I didn’t think he was going to become this big. But then I can see that he is really good at what he does, and I’m just really proud of him.

“It feels really special to have a special kid like him.”